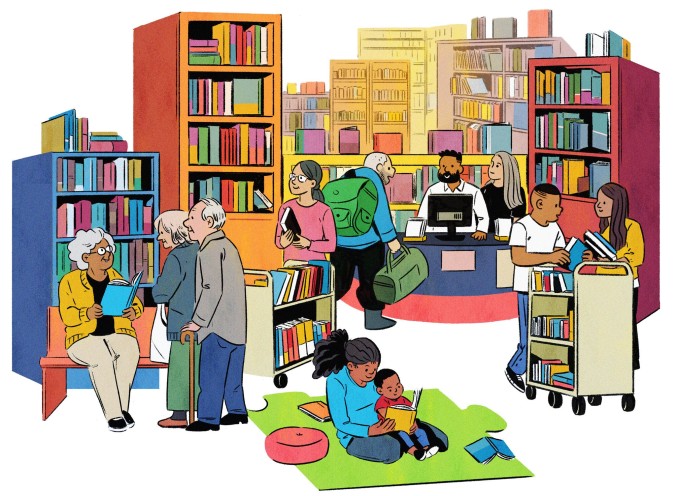 A friend of mine recently posted on social media about beautiful libraries in Halifax, as well as other favorites, including the Boston Public Library. We’ve written about libraries countless times on this site, both due to their clear cultural importance, as well as their impact within our family. It reminded me how libraries have been part of our lives since early toddlerhood for our sons, starting in Ithaca, where they were born, and in Paris, the American Library (the largest English-language lending library on the European continent) where they discovered authors like Philip Pullman and Terry Prachett. There are no limitations for what libraries have meant to our family over the years.

Thanks to sociologist Eric Klinenberg for this opinion piece.

To Restore Civil Society, Start With the Library

This crucial institution is being neglected just when we need it the most.

Is the public library obsolete?

A lot of powerful forces in society seem to think so. In recent years, declines in the circulation of bound books in some parts of the country have led prominent critics to argue that libraries are no longer serving their historical function. Countless elected officials insist that in the 21st century — when so many books are digitized, so much public culture exists online and so often people interact virtually — libraries no longer need the support they once commanded.

Libraries are already starved for resources. In some cities, even affluent ones like Atlanta, entire branches are being shut down. In San Jose, Calif., just down the road from Facebook, Google and Apple, the public library budget is so tight that users with overdue fees above $20 aren’t allowed to borrow books or use computers.

But the problem that libraries face today isn’t irrelevance. Indeed, in New York and many other cities, library circulation, program attendance and average hours spent visiting are up. The real problem that libraries face is that so many people are using them, and for such a wide variety of purposes, that library systems and their employees are overwhelmed. According to a 2016 survey conducted by the Pew Research Center, about half of all Americans ages 16 and over used a public library in the past year, and two-thirds say that closing their local branch would have a “major impact on their community.”

Libraries are being disparaged and neglected at precisely the moment when they are most valued and necessary. Why the disconnect? In part it’s because the founding principle of the public library — that all people deserve free, open access to our shared culture and heritage — is out of sync with the market logic that dominates our world. But it’s also because so few influential people understand the expansive role that libraries play in modern communities.

Libraries are an example of what I call “social infrastructure”: the physical spaces and organizations that shape the way people interact. Libraries don’t just provide free access to books and other cultural materials, they also offer things like companionship for older adults, de facto child care for busy parents, language instruction for immigrants and welcoming public spaces for the poor, the homeless and young people.

I recently spent a year doing ethnographic research in libraries in New York City. Again and again, I was reminded how essential libraries are, not only for a neighborhood’s vitality but also for helping to address all manner of personal problems…

…The openness and diversity that flourish in neighborhood libraries were once a hallmark of urban culture. But that has changed. Though American cities are growing more ethnically, racially and culturally diverse, they too often remain divided and unequal, with some neighborhoods cutting themselves off from difference — sometimes intentionally, sometimes just by dint of rising costs — particularly when it comes to race and social class.