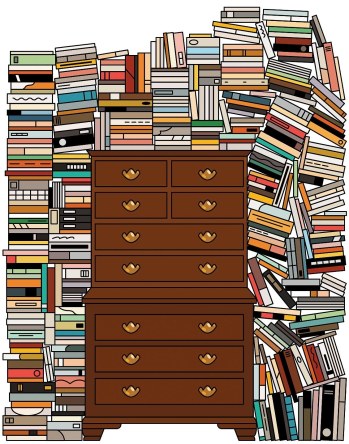 My father loved books ravenously, and his always had a devoured look to them. Illustration by Rose Wong

Kathryn Schulz came to my attention four years ago, and we immediately deemed her worthy of an invitation to Kerala. We linked to two more of her articles after that, but re-reading the first essay, it is easy to recall what “ignorance is bliss” means. The world was, as always, facing challenges. But I had no clue then what 2019 would look and feel like, so I enjoyed that essay differently then than I do now.

I am in need of more frequent diversions from the daily news, not to hide but to remember what matters. Times like these call for tangible reminders of what is good and healthy for us, much as comfort foods at certain other times are required to anchor us to better thinking. Food seems the most common thing to turn to for comfort, but books are a better one because ideas that come from books are not just to be remembered, but to renew inspiration, commitment, and determination related to values:

My Father’s Stack of Books

When he was a child, books were gifts. For his daughters, he made sure they were a given.

When I was a child, the grownup books in my house were arranged according to two principles. One of these, which governed the downstairs books, was instituted by my mother, and involved achieving a remarkable harmony—one that anyone who has ever tried to organize a home library would envy—among thematic, alphabetic, and aesthetic demands. The other, which governed the upstairs books, was instituted by my father, and was based on the conviction that it is very nice to have everything you’ve recently read near at hand, in case you get the urge to consult any of it again; and also that it is a pain in the neck to put those books away, especially when the shelves on which they belong are so exquisitely organized that returning one to its appropriate slot requires not only a card catalogue but a crowbar.

It was this pair of convictions that led to the development of the Stack. I can’t remember it in its early days, because in its early days it wasn’t memorable. I suppose back then it was just a modest little pile of stray books, the kind that many readers have lying around in the living room or next to the bed. But by the time I was in my early teens it was the case—and seemed by then to have always been the case—that my parents’ bedroom was home to the Mt. Kilimanjaro of books. Or perhaps more aptly the Mt. St. Helens of books, since it seemed possible that at any moment some subterranean shift in it might cause a cataclysm.

The Stack had started in a recessed space near my father’s half of the bed, bounded on one side by a wall and on the other by my parents’ dresser, a vertical behemoth taller than I would ever be. At some point in the Stack’s development, it had overtopped that piece of furniture, whereupon it met a second tower of books, which, at some slightly later point, had begun growing up along the dresser’s other side. For some reason, though, the Stack always looked to me as if it had defied gravity (or perhaps obeyed some other, more mysterious force) and grown down the far side of the dresser instead. At all events, the result was a kind of homemade Arc de Triomphe, extremely haphazard-looking but basically stable, made of some three or four hundred books.

I have no idea why we called this entity the Stack, considering the word’s orderly connotations of squared-off edges and the shelving areas of libraries. It’s true that the younger side of the Stack mounted toward the ceiling in relatively tidy fashion, like the floors of a high-rise—a concession to its greater proximity to the doorway, and thus to the more trafficked area of the bedroom, where a sudden collapse could have been catastrophic. But the original side was another story. Few generally vertical structures have ever been less stacklike, and no method of storing books has ever looked less like a shelf.

Some people love books reverently—my great-aunt, for instance, a librarian and a passionate reader who declined to open any volume beyond a hundred-degree angle, so tenderly did she treat their spines. My father, by contrast, loved books ravenously. His always had a devoured look to them: scribbled on, folded over, cracked down the middle, liberally stained with coffee, Scotch, pistachio dust, and bits of the brightly colored shells of peanut M&M’s. (I have inherited his pragmatic attitude toward books and deliberately break the spine of every paperback I start, because I like to fold them in half while reading them.) In addition to the Stack, my father typically had on his bedside table the five or six books he was currently reading—a novel or two, a few works of nonfiction, a volume of poetry, “Comprehensive Russian Grammar” or some other textbooky thing—and when he finished one of these he would toss it into the space between the dresser and the wall. Compression and accumulation—especially accumulation—did the rest.

To my regret, I have only a single photograph of the result. I have spent a great deal of time studying it, yet find many of the books in it impossible to identify. Some tumbled into the Stack spine in, rendering them wholly unknowable, while others fell victim to low resolution, including a few that are maddeningly familiar: an Oxford Anthology whose navy binding and gold stamp I recognize but whose spine is too blurry to read; a book that is unmistakably a Penguin Classic, but that hardly narrows it down; an Idiot’s Guide to I don’t know what. In some cases, I can make out the title but had to look up the author: “Pirate Latitudes” (Michael Crichton), “Mayflower” (Nathaniel Philbrick), “Small World” (David Lodge), “The Way Things Were” (Aatish Taseer). In others, conversely, I can see the author but not the title: something by Carl Hiaasen, something by Wally Lamb, something by Nadine Gordimer, something by Gore Vidal.

Plenty of other books in the Stack, however, are perfectly visible, and perfectly familiar. There’s the collected works of Edgar Allan Poe; there’s “Pale Fire” and “White Teeth”; there’s “Infinite Jest” and “Amerika.” There’s Wallace Stegner’s “Angle of Repose,” a book my father mailed to me in my early twenties, together with “Our Mutual Friend,” when I was travelling and lonely and had run out of things to read. In the Stack, Stegner’s novel has achieved its own angle of repose, alongside Richard Friedman’s “Who Wrote the Bible?” and Antonio Damasio’s “The Feeling of What Happens.” Above that is Stephen E. Ambrose’s “Undaunted Courage,” about Lewis and Clark’s westward journey, and Diane McWhorter’s “Carry Me Home,” about the civil-rights movement in Birmingham. There’s Thomas Pynchon’s “Mason & Dixon” and Cormac McCarthy’s “The Road,” Michael Chabon’s “The Amazing Adventures of Kavalier & Clay” and Beryl Markham’s “West with the Night.” There are books I can remember discussing with my father—Ian McEwan’s “Atonement,” Jonathan Franzen’s “Freedom,” Sarah Bakewell’s “How to Live”—together with books I had no idea he’d read and, despite his insatiable curiosity, no idea he would have cared to read: the Peterson Field Guide to Eastern Birds, Temple Grandin’s “Animals in Translation,” Neal Stephenson’s “Cryptonomicon.”…