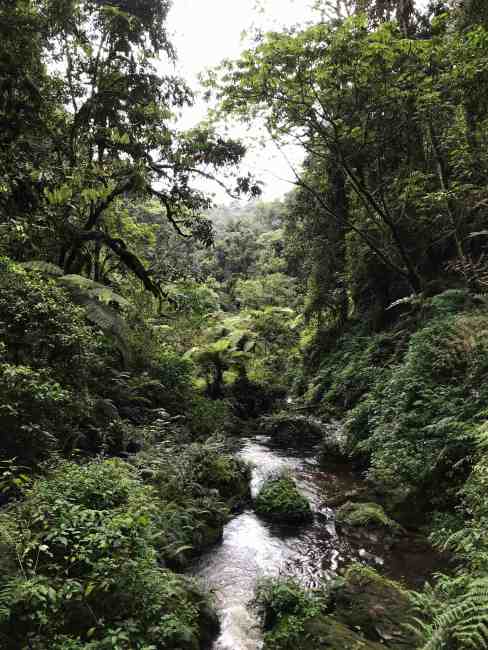 A view from inside Nyungwe National Park

When I came into the master of environmental management program at Yale FES, the Wildlife Conservation Society (WCS) wasn’t really on my radar as a big international conservation NGO — other names like the World Wildlife Fund, The Nature Conservancy, Conservation International, or Flora and Fauna International came to mind first. As I started to learn about the biodiversity hotspot of East Africa’s Albertine Rift, however, WCS programs and technical reports started to come up more and more, and the professional experience shared by my professors Amy and Bill in their class (Building a Conservation Toolkit: From Project Design to Evaluation) led to many discussions about their work with WCS.

As part of the Rwanda Study Tour, we met with WCS employees in Kigali and two towns neighboring Nyungwe National Park called Gisakura and Kitabi. These Rwandans, some of whom had been with the NGO for over fifteen years, told us about the conservation efforts carried out by WCS in the region, much of which revolves around capacity building, scientific monitoring, and community education and engagement. For example, since the nineties WCS has been recording phenological data from native trees and vegetation in Nyungwe, which can be a valuable reference for seasonal variations in plants affected by climate change. WCS has also trained park rangers on different data collection methods that have improved monitoring systems in the park to document cases of poaching efforts such as wire snares, which are still a major threat to the small forest antelopes that live in Nyungwe. 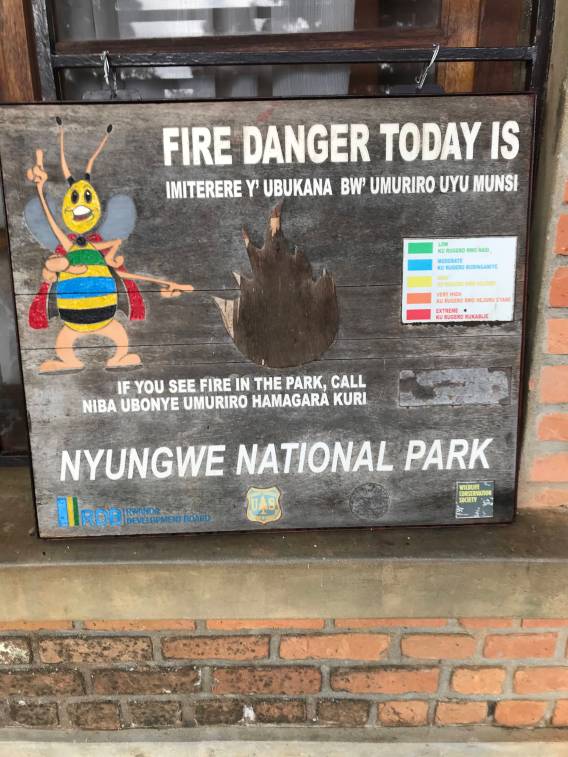 A sign outside the WCS field office in Gisakura, neighboring Nyungwe

As for community outreach, we listened one evening to a radio drama created by WCS in partnership with the Rwanda Development Board, which is broadcast once a week in the local language of Kinyarwanda and covers topics like micro-loans, fuel-efficient stoves, poaching, and ecosystem services from the forest, but all in the setting of a soap opera, which we have been told is quite engaging. At the end of each episode, listeners are invited to call in and answer three questions–if they can do so correctly they will receive a solar-powered lamp. 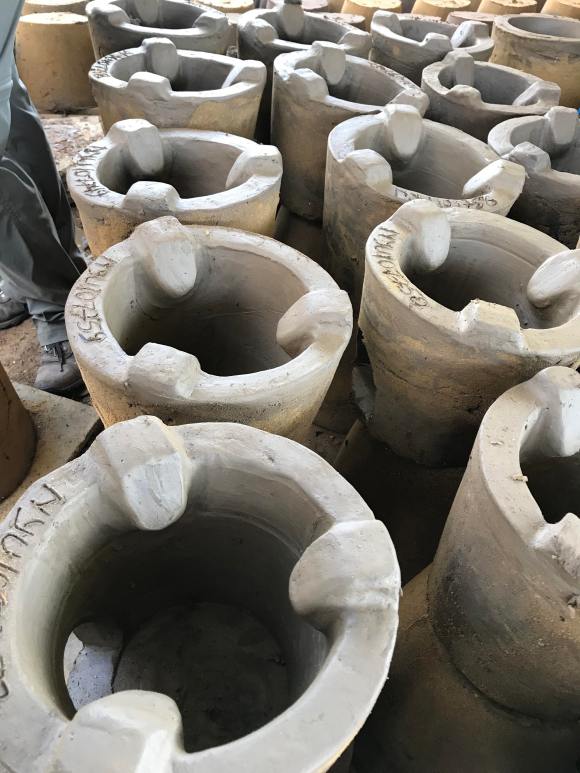 We visited one of the fuel-efficient stove operations near Nyungwe, where a small cooperative is making these out of sand and clay with some support from WCS.

In the town of Kitabi, we joined a WCS employee who is a bee-keeping expert on a tour of the honey-processing facility he assisted a local community cooperative set up, where they sell honey and other bee products like wax candles or lip balm (some more photos from this experience were shared here). We spoke with about a dozen members of the bee-keeping cooperative, who were mostly men who appeared to be in their fifties or sixties, and learned about how successful they’ve become through the guaranteed demand of the honey cooperative. By consistently being able to sell their honey in this system, they have been able to buy their own livestock, including cows and pigs, they pay their children’s school fees and their family’s insurance, and so on. 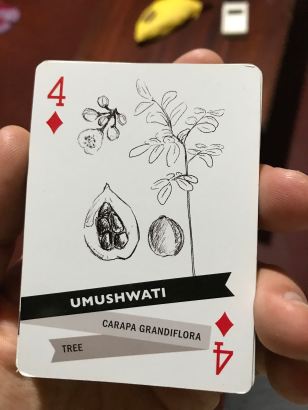 A playing card from a deck WCS made for Nyungwe National Park, featuring a species of tree endemic to Nyungwe and Gishwati forests — the latter is actually named after the umushwati tree.

Through assistance in setting up their hives outside the forest, where honey was traditionally collected, there have been fewer fires from accidents where smoking out bees from natural hives in the national park led to forest fires that radically change the ecosystem. Many of these men expressed their concern at the previous danger of bee-keeping in the forest, where they might be accused of poaching wildlife, or encounter another person trying to access the same beehive and risk an altercation. In owning their own hives near their homes, they feel safer and more in control of their livelihoods, and are happy to champion the services that Nyungwe provides to their communities. It was heartening to listen to their accounts and see how directly an NGO like WCS has been able to both promote conservation by curtailing illegal forest use and providing a strong alternative livelihood.