The Lilac-breasted Roller is the star of Akagera, in my opinion (at least for the bird life), as a reliable and beautiful species that you can’t miss while visiting.

Over the last month and a half I’ve been immersed in my Gishwati bird research, so I have not been able to take as much time to write about experiences from the Rwanda Study Tour as much, but now that I’m back in the US, I have some better bandwidth to share media from places like Akagera National Park.

Akagera has the highest bird species richness in all of Rwanda, with literature about the park normally citing either high 400s or low 500s as the total tally. On eBird, there’s a number of different hotspots for the park, but the top three hotspots in the country are all in Akagera, with another two hotspots within the top ten.

Senegal Lapwing. I like the triple color in the eye.

The tough thing about birding in this sort of savannah though, is that spotting small flying or perched objects from a moving vehicle can be difficult in itself, and then there’s the social cost of constantly asking the car driver—in this case, our Rwanda Ecotours guide Yasin, or when I returned to Akagera last week, my friend Austin—to stop the car so that you can check if the bird is something interesting. And normally it’s only interesting to you, because everyone else in the car is waiting to see more exciting stuff like mammals.

An unidentified butterfly on the side of the road

So I ended up watching dejectedly as we whizzed by dozens of potentially new or photo-worthy species, because I didn’t want to overly waste the group’s time on these things with wings. While I practiced this restraint, I was still able to get good looks at some birds and butterflies while we stopped to see less exciting sights like baboons or buffalo, and of course I did occasionally ask Yasin to stop the car if there was a particularly promising species on the side of the dirt roads that criss-cross Akagera’s lakes and plains. 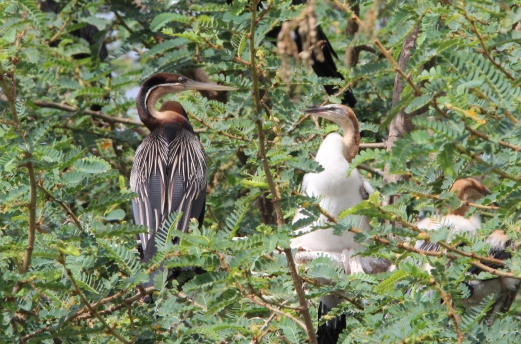 A mother and child Anhinga reunion

Having a specialized safari vehicle that has a pop-up roof can be invaluable for viewing wildlife, as long as you’re not stuck behind another car that is kicking up dust. When Austin and I drove through the park last week with friends from the Yale School of Forestry and Environmental Studies, we used a little 1999 Rav4 and while I sat up front with decent visibility through the windshield, it was not the same as standing in a Landcruiser with the roof extended, so I do recommend going for that option if you can. All the photos in this post are from the first, two-night trip that the Rwanda Study Tour took to Akagera in late May.

3 thoughts on “Things with Wings in Akagera National Park”