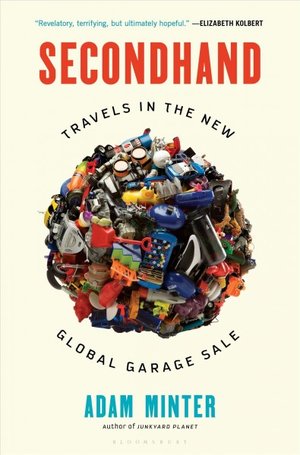 Adam Minter has not appeared in our pages before, surprisingly. Stories with recycling and upcycling themes have been featured dozens of times on this platform, but this theme is just enough different as to qualify as original, to us. Thanks to National Public Radio (USA) for this review and author interview:

Author Adam Minter remembers two periods of grief after his mother died in 2015: the intense sadness of her death, followed by the challenge of sorting through what he calls “the material legacy of her life.”

Over the course of a year, Minter and his sister worked through their mother’s possessions until only her beloved china was left. Neither one of them wanted to take the china — but neither could bear to throw it out. Instead, they decided to donate it.

Waiting in the donation line at Goodwill, Minter began wondering what would happen to the dishes: “It occurred to me this is a very interesting subject,” he says. “Nobody really knew what happened beyond the donation door at Goodwill.”

Minter had spent nearly two decades reporting on the waste and recycling industries. Now he began looking into the market for secondhand goods, both domestically and in Africa and Asia.

“Your average thrift store in the United States only sells about one-third of the stuff that ends up on its shelves,” he says. “The rest of the stuff ends up somewhere else.”

Minter visited Goodwill donation centers in the U.S. and watched as employees engaged in a sophisticated sorting and pricing system. He noted that while designer clothes might be set aside as “boutique” items, other products — including heavy wooden furniture and outdated exercise equipment — were often destined for the dump.

“A 300-pound oak dining room table … becomes a problem,” he says. “You will see some of this very nice oak furniture, if it can’t be sold, it will end up in the landfill.”

Minter’s new book, Secondhand, explores the afterlife of donated clothes and electronics. His previous book, Junkyard Planet, was about the recycling industry.

On the rise of “cleanup” companies, which help people sort through and dispose of their possessions

As populations age, and children move away from home, you have an increasingly elderly population in the United States, for example, that wants to downsize for whatever reason into retirement. … And that means that they need to get rid of their stuff that they’ve accumulated for a lifetime.

This profession has existed for centuries, in a sense — there’s always been scavengers going to people’s homes as they leave them. But now it’s taken on sort of a new tint. And what they do is they sort of counsel people on helping them get rid of the things, sometimes encourage them, sometimes nudge them, and then help them make the move. …

The very best of the cleanup professionals that I spent time with, they kind of reminded me of therapists. Again, it was having to sit with somebody and explain to them, “You don’t need this.” And that person explaining to the cleanup professional, “This wedding china, when it was given to me 50, 60 years ago, I was going to keep it forever and now I’m downsizing. You’re asking me to let go of this wedding china, which isn’t just this material thing that I put in a cabinet and looks pretty, but it’s really a part of my identity.”…