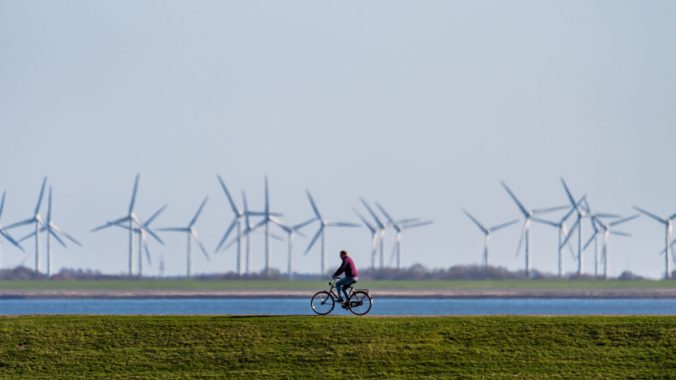 A bicyclist on an embankment in front of wind turbines in Norderney, Germany. LINO MIRGELER/GETTY IMAGES

Thanks to David G. Victor for this opinion:

Building Back Better: Why Europe Must Lead a Global Green Recovery

With the global economy reeling from the pandemic, most nations are focusing stimulus programs on reviving employment. But Europe is moving forward with a Green Deal initiative that provides a framework for decarbonizing its economy and spurring the rest of the world to follow.

As governments spend massively to revive economies, a huge battle has emerged around whether the economic recovery should also achieve other goals, particularly cutting the emissions that cause climate change. Those advocating green spending say the $10 trillion that governments have already committed to stimulus should be just the beginning, and an even bigger pile of cash is now needed for expansive “green new deals.”

In most countries, the political forces are blowing against green recovery. Distant, abstract goals like global warming have fallen far down the list of priorities while paychecks and health loom much larger than they did six months ago. Some have actually relaxed pollution control standards and will take growth at any cost. While there are many policies that could deliver economic growth and lower emissions, most of them don’t work quickly — and thus don’t deliver what most citizens expect from government today. With global markets and societies in chaos, our ability to forecast has gone down; risks for investors in long-lived technologies, which is most of what’s needed for deep decarbonization, have gone up. Unlike the last financial crisis, when nations spent up to 15 percent of their stimulus money on clean energy, few have such forward-looking plans this time.

Europe, however, is the exception. There, the European Green Deal — a $1.1 trillion climate-focused infrastructure and decarbonization plan that had been cooked up before the pandemic — looks set to get even bigger now. Why? Because for decades the problem of climate change has gone mainstream in Europe. Outside of a few places (e.g., coal-burning Poland) and a few political stripes (e.g., populist nationalists) every major political party, left and right, has embraced climate as a core goal. As the U.S. government has waxed and waned on enthusiasm for climate policy (right now, we are in the Dark Ages), Europe has always been supportive. Now is Europe’s moment to use that leadership to change the world…