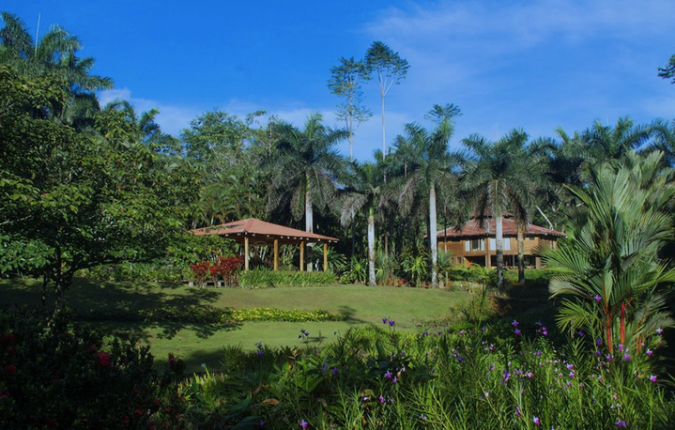 Macaw Lodge’s gardens fill the landscape with color and provide shelter and food for hundreds of species of animals. All photos by Hugo Santa Cruz

It is regularly the first to wake, its song encouraging us all to do the same. It is still dark but the Great Tinamou is already singing, while a couple of hundred more species begin to flap their wings, to soon sing different songs––some very complicated and sophisticated, to make them stand out from the rest.

As I get ready for the day, I mentally identify and count the different sounds I hear––trying to imitate some of them with little success. While brushing my teeth I go through the 13 identified species, leaving 2 or 3 that I don’t recognize. 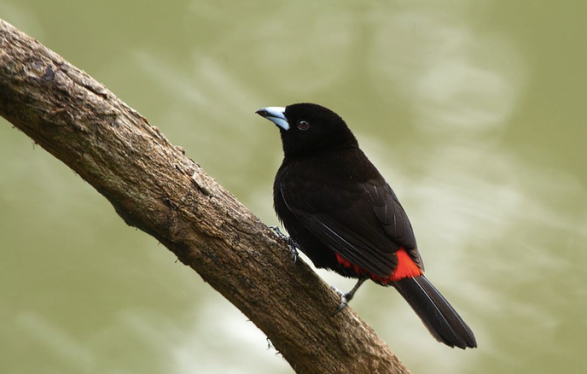 The recognition of birds by songs and calls is essential to count effectively; some of these songs will delight the most demanding ears, as much as good jazz; and others not so much. Some people living in wilderness areas like this may even come to hate some of the calls, such as the tireless, insistent and unending calls of the Ferruginous Pygmy-Owl. You will feel that it follows your steps day by day, night by night; wherever you move or where you try to sleep…  Unfortunately you’re unlikely to  actually see it, because it has excellent camouflage, and at scarcely 15 cm tall but living 20m high in the trees, it will remain invisible, but you will know it is there, because you’ll hear it even in your dreams…
If you’re “lucky” to encounter the little owl when he’s looking for a girlfriend, you’ll understand what I mean … and that’s that all people in this area have their history with the “Maja-Fierro” – local name of the owl, due to his shrill and constant monotonous whistle.

Heading towards the main social area of the lodge, just a few meters after leaving my cabin I observe a Neotropical Otter hurrying across the path and into the forest––one of the 14 species of mammals I’ve registered in the lodge in little more than 2 months. In the distance I can make out a group of British and American nature enthusiasts, directing their gaze in all directions, with the help of their binoculars and telephoto lenses.
Once at the meeting point, I greet the group and I respond to their excited questions, but with my eyes focused on the search for new species, while I’m pointing out everything that we have around us. It’s barely 05:50 and our record is already close to 20 species.

The aggressive and territorial Rufous-tailed Hummingbird was among the first to make their presence known, flitting  through the flowers next to the dining room, which has a great view across the main lagoon and the lodge gardens. Despite their aggressive character, the hummingbirds of this species share the nectar with the Beryl Crown Hummingbirds (Charming Hummingbird, a regional endemic species). The flowers are sufficiently abundant and the two species tolerate each other’s presence as long as they respect their side of the scrub. For a few moments a White-crested Coquette manages to get close to the flowers, but a few seconds later is expelled by the hummingbird alpha.
In the same ecosystem we not only find those interested in nectar, some Variable Seedeaters, Costa Rican Tanagers (Scarlet-rumped Tanager––another regional endemic species), Common Tody-Flycatchers and others; who interact and feed inside the bush. And even closer to us, the Bananaquit moves, piercing the tubular flowers at the base of the shrub next to the balcony; stealing nectar from flowers, without even pollinating them.

Without even leaving the dining area we continue to look in all directions and notice the hurried passage of the Gray-cowled Woodrail, a pair of Northern Waterthrush and other Buff-rumped Warblers pass more calmly.
A pleasant aroma indicates that the coffee is served, but although tempting, it isn’t enough to distract us from our  search for new species.
Not only the winged beings show themselves in this peaceful and at the same time busy morning. Green Iguanas and common basilisks seize the highest branches of some trees, and with eyes closed meditatively, they bask in the early morning sun, receiving the warmth they require to activate their bloodstream.

The garden’s numerous waterbodies allow us to observe several species of aquatic birds such as the Northern Jacana, some herons (Green Heron, Bare-throated Tiger-Heron), the unusual Green Ibis (rarely reported on the Pacific side of Costa Rica), kingfishers (Ringed Kingfisher and Green Kingfisher), some shorebirds (Spotted Sandpiper and Lesser Yellowlegs) and even the shy White-throated Crake, who allows us to spot it even for a couple seconds. 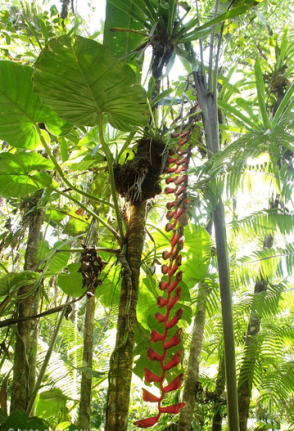 Heliconia sp., with a bract over 2 m long, is one of the 50 species of heliconia in the reserve

All the biodiversity of fauna is accentuated by the colorful botanical garden around us. The vast majority of the botanical species in the garden were planted some decades ago; each of them chosen under delicate criteria of landscaping and ecological functionality. A choices of trees and shrubs, native and exotic, create a space with very high biological density for both animal and plant species.
It is 06:20 and we already have about 30 species on our list. It’s time to scroll through the gardens. Starting the trail, the territorial birds that consistently maintain their domains begin to greet us. Around the lagoon on several perches we observe the different pecho amarillos, or “yellow chests”––at least 6 species of flycatchers, all of them with chests of the aforementioned color. At the top of the main roof I point out a plain-looking bird that otherwise wouldn’t attract anyone’s attention, until it begins to sing. We can’t help but smile as we revel in the vocalization of the Melodious Blackbird.

View of the Turrubares Hills

A few meters away we sighted an Erythrina (Tiger Claw) in full bloom whose nectar attracted new species of hummingbirds for our list (Long-billed Hermit and Long-billed Starthroat). They weren’t the only ones after those precious flowers; a Variegated Squirrel was also feeding on them. A few seconds later the Lesson’s Motmot arrived showing off its colorful plumage and its strange and elongated tail, and the guests began taking a flurry of photographs.
After the excitement of the motmot, we continued passed the yoga platform and we observed some people doing sun salutations. They weren’t the only ones having this morning ritual, a few meters away a Broad-winged Hawk, perched with open wings, received the energy of the dawn rays. 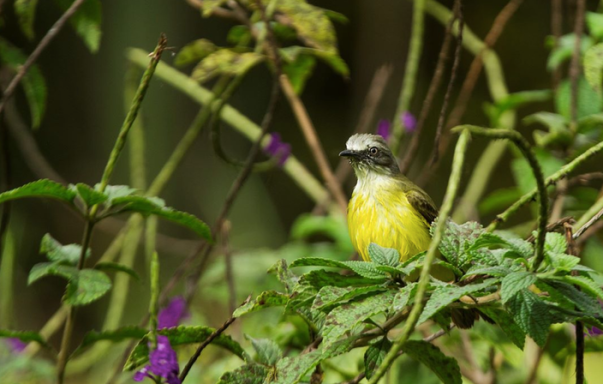 Morning birding is best before the sun is too high in the sky, so I try to rush the group to reach an area of ​​interest with several species of trees attractive to birds. The still flowering guavas lure the White-necked Jacobin and Scaly-breasted Hummingbird;  Cecropia trees  bring species of tanagers and honeycreepers; and what I most expected… the flowering Scheefleras attracted 3 Collared Aracari and also some nosy and common Yellow-throated Toucans. The Scarlet Macaws haven’t yet come to feed on the mountain almonds.

Standing for more than half an hour in this section of the garden, I update the checklist and see that we have already exceeded 40 species. When we finally decided to continue our walk, two pairs of Scarlet Macaws landed in the almond trees near us and began to have breakfast. I wasn’t really surprised, lapas tend not to be early risers. The guests were rewarded for their patience. While they busily began photographing the charismatic birds I noticed a couple of Golden-naped Woodpeckers landing right next to us in a dry Cecropia, but the lapas had already stolen the show.

At this point we’d been birding for more than 90 minutes and had only traveled 200 meters but had experienced quite a few different habits in that short distance. We continued towards the palm garden, made up of more than 20 species of palm trees, most of them exotic. We discovered a Licuala sp. with 16 Common Tent-making Bats, but continued without disturbing their sleep. Further on, we observed some elusive Gray-headed Chachalaca feeding on the fruits of other palm trees.

Resuming our walk, I point out a termite mound with a circular cavity at the top of a tree. A pair of Slaty-tailed Trogons perch nearby, indicating that it’s a nest under construction so we move on quickly so as not to interrupt the work of these, hopefully, future parents. Trogons often make their nests in termite mounds and even hornets’ nests, their weak and fragile beaks do not allow them to drill cavities in the logs, so the soft material of an abandoned termite mound is often their best option for nesting.
We entered one of the highest forest trails and found several species of warblers, flycatchers, woodpeckers and even a couple of tityras ; a female Orange-collared Manakin perches very close to us and we anticipate that her colorful mate will also arrive soon… unfortunately he remained elusive.

We arrive at the cocoa plantation. These 10 hectares of an agroforestry plantation provide another type of habitat, where we continue to encounter more and more species of birds; among them some birds of prey, puffbirds, seedeaters and wrens. Macaw Lodge produces high quality cocoa, coming from the diverse forest that combines with guavas, teak, almond trees, different palm trees and shrubs, and many others; which allow the interaction of more than 80 species of birds and some mammals, reptiles and amphibians. 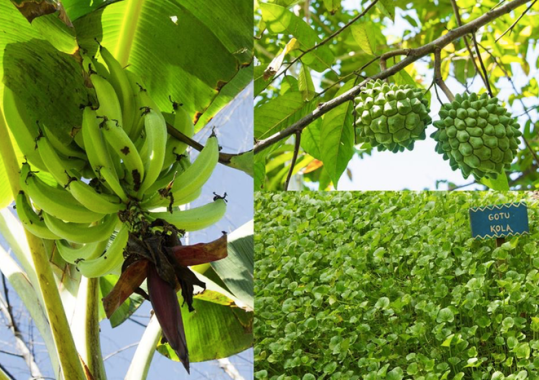 The reserve farm produces around 50 types of vegetables and fruits, which are consumed in the Ecolodge

Later we pass by the lodge’s fruit and vegetable garden. Our human guests aren’t the only ones to enjoy the abundance, several winged residents also benefit from papayas, strawberries, carambola, pitangas, katuk flowers, just to mention a few. It’s tempting to linger, look and smell, but a strange noise coming from our stomachs reminds us that it is time for breakfast; the traditional Costa Rican pinto, accompanied by fruits and other produce grown in the Macaw Sanctuary await us. We had 60 species of birds registered before breakfast, the birding had just begun…