Reading this op-ed reminded me of a book that I read in my mid-teens. I remember reading it cover to cover in one sitting and it sparked a kind of book-reading that had not been part of my life previously.  I was a plot-driven reader and April Morning got me more interested in character. So my belated thanks to one of the librarians, circa 1978, at the amazing library down the street from our home, who recommended this book to me. When I came back to see what other books by the same author were available, I saw that he had a very long list of titles in the card catalog. 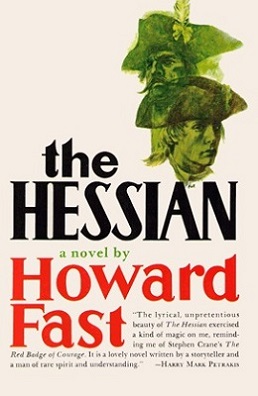 So I asked for help from another librarian, and soon I was reading this other historical novel. Reading The Hessian may account for my becoming an English major in college a few years later. I did not like this book nearly as much. And this led to a conversation with the librarian who had recommended it to me. Literary criticism it was not, but having something to say about the difference between the two books, and hearing someone else’s opinion on the same, was interesting. Belated thanks to that librarian for that conversation, and for the next gift.

She told me that Howard Fast would be giving a lecture in the library’s auditorium the following week. That too would be a first. I had never attended an author’s lecture before. He was talking about a book, The Immigrants, that had just been published. I do not remember much about the lecture, but at the end of it I went to the front of the auditorium and handed the author an envelope. In it was a short letter thanking him for writing the two books I had read, and sharing a few thoughts I had exchanged with the librarian. Days later I received a letter in the mail. It was from the author, replying to the letter this kid had handed him in the auditorium. Thank you, Howard Fast.  And thank you, librarians.