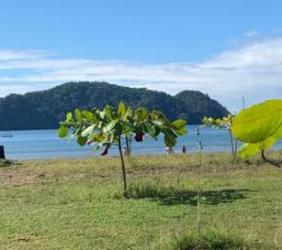 Last week I walked with my grand-daughter among these almendro trees. Amie and I helped plant these when they were foot-high saplings in 2019, and we tagged one with our grand-daughter’s name. The trees, now 3+ feet high, are part of a coastal reforestation scheme; their beneficence includes producing fruits favored by scarlet macaws. 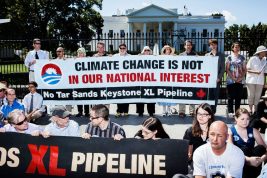 Demonstrators gather in front of the White House to protest the proposed Keystone XL pipeline, in the summer of 2011. Photograph by Melissa Golden / Redux

Everyone loves scarlet macaws. And these trees grow faster than our grand-daughter, giving constant positive feedback. When you have an opportunity to do something like plant a tree, or any other restorative act, first things first: do it. Thanks to Bill McKibben for pointing this out as one of the highlights of yesterday’s change of scenery in Washington, D.C.:

In his first hours in office, Joe Biden has settled—almost certainly, once and for all—one of the greatest environmental battles this country has seen. He has cancelled the permit allowing the Keystone XL pipeline to cross the border from Canada into the United States, and the story behind that victory illustrates a lot about where we stand in the push for a fair and working planet.

To review: Keystone XL, a project of the TransCanada Corporation (now TC Energy), was slated to carry oil from Alberta’s tar sands across the country to refineries on the Gulf of Mexico. President George W. Bush approved the original Keystone pipeline, and it went into service, early in the Obama years, without any real fuss. A new XL version, announced in 2008, was larger and took a different course across the heartland. And, this time, there was opposition. It came first from indigenous people in Canada, who had watched tar-sand mines lay waste to a vast landscape. First Nations leaders, such as Melina Laboucan-Massimo and Clayton Thomas-Muller, along with Native-American leaders on this side of the border—including Tom and Dallas Goldtooth, of the Indigenous Environmental Network—put up strong resistance and joined forces with ranchers whose lands would be bisected by the pipeline. Organizers such as Jane Kleeb, in Nebraska, found small pockets of support within some of the “big green” environmental groups, much of it coördinated by the veteran campaigner Kenny Bruno. In the spring of 2011, the nasa climate scientist James Hansen helped orient the pipeline as a climate-related fight, pointing to the massive amounts of carbon contained in the Canadian tar-sand deposits and making the case that, if they were fully exploited, it would be “game over” for the climate. That brought the climate movement into the picture; a letter (full disclosure: I drafted it) went out in the summer of 2011, asking people to engage in civil disobedience outside the White House.

At first, it wasn’t clear how many would do so, in part because President Barack Obama was popular with environmentalists. But people—many of them wearing Obama buttons—began arriving in serious numbers. Before two weeks of protest, starting in late August, were over, 1,254 people had been arrested, in one of the largest nonviolent direct actions in recent years. A few months later, many times that number circled the White House perimeter, standing shoulder to shoulder, five deep. The big environmental groups quickly joined the fight. Even so, the experts said that there was no chance to stop the pipeline. (The National Journal polled its “energy insiders,” and ninety-one per cent said that TransCanada would soon have its permit.) But, in fact, the battle was over by mid-November, when Obama announced a delay, in order to consider the question more closely. As he consolidated support for his reëlection bid, he had apparently concluded that “Keystone” and “climate” were too closely linked, though it took him several years to officially reject the permits. Ever since that initial pause, it’s been a matter of holding on to that victory—in close votes in Congress, during the Obama years, in endless wrangling with financiers, and with brilliant maneuvering in the courts, after Donald Trump revived the pipeline during his first days in office. I’m very grateful for Biden’s action, but I had no doubt he would take it—even today, Keystone is far too closely identified with climate carelessness for a Democratic President to be able to waver.

The success in 2011 was, to some degree, a matter of timing. There was already growing concern about global warming, and Keystone proved to be the catalyst for the rapid expansion of the climate movement, which was soon fighting for such things as fossil-fuel divestment and renewable portfolio standards for solar power. The events of 2011 also showed that the fossil-fuel industry was not unbeatable, and it encouraged people to oppose the construction of just about every new fracking well and coal port and liquid-natural-gas terminal. Environmentalists have won many of these infrastructure battles, and they’ve added delay and cost to projects. (Who knows how many bad things were never even proposed in the wake of Keystone XL?) The wins continue: last fall, after an inspired decade-long campaign led by Michigan environmentalists, Governor Gretchen Whitmer announced that the state would close down a tar-sands pipeline through the Straits of Mackinac, in the heart of the Great Lakes. But there have been plenty of losses, too, and Biden will get to help decide the fates of two other critical projects that resemble KXL in many ways…