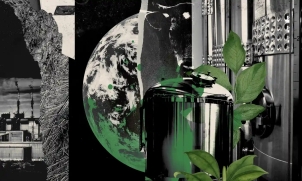 It is the first time we are seeing these two words together, and George Monbiot has this to say about the potential implied:

Embrace what may be the most important green technology ever. It could save us all

So what do we do now? After 27 summits and no effective action, it seems that the real purpose was to keep us talking. If governments were serious about preventing climate breakdown, there would have been no Cops 2-27. The major issues would have been resolved at Cop1, as the ozone depletion crisis was at a single summit in Montreal.

Nothing can now be achieved without mass protest, whose aim, like that of protest movements before us, is to reach the critical mass that triggers a social tipping point. But, as every protester knows, this is only part of the challenge. We also need to translate our demands into action, which requires political, economic, cultural and technological change. All are necessary, none are sufficient. Only together can they amount to the change we need to see.

Let’s focus for a moment on technology. Specifically, what might be the most important environmental technology ever developed: precision fermentation.

Precision fermentation is a refined form of brewing, a means of multiplying microbes to create specific products. It has been used for many years to produce drugs and food additives. But now, in several labs and a few factories, scientists are developing what could be a new generation of staple foods.

The developments I find most interesting use no agricultural feedstocks. The microbes they breed feed on hydrogen or methanol – which can be made with renewable electricity – combined with water, carbon dioxide and a very small amount of fertiliser. They produce a flour that contains roughly 60% protein, a much higher concentration than any major crop can achieve (soy beans contain 37%, chick peas, 20%). When they are bred to produce specific proteins and fats, they can create much better replacements than plant products for meat, fish, milk and eggs. And they have the potential to do two astonishing things.

The first is to shrink to a remarkable degree the footprint of food production. One paper estimates that precision fermentation using methanol needs 1,700 times less land than the most efficient agricultural means of producing protein: soy grown in the US. This suggests it might use, respectively, 138,000 and 157,000 times less land than the least efficient means: beef and lamb production. Depending on the electricity source and recycling rates, it can also enable radical reductions in water use and greenhouse gas emissions. Because the process is contained, it avoids the spillover of waste and chemicals into the wider world caused by farming…