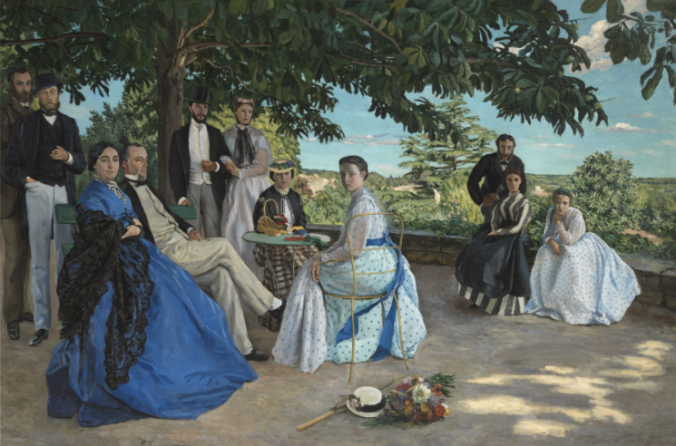 Frédéric Bazille’s The Family Gathering has none of the quick, airy brush strokes his future impressionist peers would discover; but the sunshine is there, as are the bright colors. MusÃ©e d’Orsay, Paris/Courtesy of the National Gallery of Art

Considering the changes in the air of the 1860’s Paris art scene, the “might have been” aspect of this story about a lesser known 19th century French painter is poignant, to say the least. Thanks, once again, to NPR for sharing this story about what could have been.

France’s ambassador to the United States, Gérard Araud, is a fan of 19th-century French painter Frédéric Bazille. But I had a confession to make when I spoke with him about the National Gallery’s “Frédéric Bazille and the Birth of Impressionism” exhibition. I said that I usually walk right past Bazille’s paintings and go straight to the impressionists — and I assume I’m not the only one who does that.

Araud understands, but says he likes Bazille for the opposite reason: The impressionists are so well-known, he says, “I’ve reached a point where I don’t look at them anymore.”