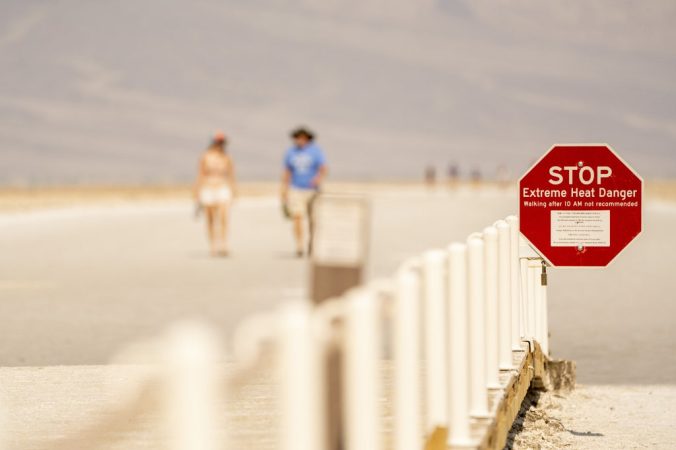 Last week, researchers at nasa and noaa found that “the earth is warming faster than expected.” Photograph by Kyle Grillot / Bloomberg / Getty

This week’s newsletter ponders how adaptable we are and serves as a reminder that we cannot take for granted that we are sufficiently so for the changes upon us:

It’s Not the Heat—It’s the Humanity

Rising air temperatures remind us that our bodies have real limits.

It’s hard to change the outcome of the climate crisis by individual action: we’re past the point where we can alter the carbon math one electric vehicle at a time, and so activists rightly concentrate on building movements large enough to alter our politics and our economics. But ultimately the climate crisis still affects people as individuals—it comes down, eventually, to bodies. Which is worth remembering. In the end, we’re not collections of constructs or ideas or images or demographics but collections of arteries and organs and muscles, and those are designed to operate within a finite range of temperatures. END_OF_DOCUMENT_TOKEN_TO_BE_REPLACED

We already know that climate change is no longer something to be concerned about for the future, but rather a very present danger. There are ways they can adapt, and part of that involves becoming more sustainable, as some are already doing. But one thing we hadn’t learned much about until now is the impact of increasing heat on the urban environment. Madeline Ostrander writes:

Katy Schneider, the former deputy mayor of Louisville, Kentucky, lives near Eastern Parkway, which forms one strand of her city’s necklace of green. Spending time on the leafy boulevard can make Louisville seem deceptively lush and shady, even when midsummer heat bakes the downtown. But about five years ago, Schneider was surprised to learn that the city had a shortage of trees. In the spring of 2011, students at the University of Louisville surveyed the local canopy and found that it had about thirteen per cent fewer trees than the average for metropolitan areas in the region.