We had a tradition from the moment we arrived in Kerala, inviting some of our favorite people to come see what we were doing there. This one’s work at Cornell was a lovely coincidence because of Seth’s work at the Lab of Ornithology. But mainly, a conservation-oriented naturalist illustrator seemed a perfect fit for what we do. So, seeing what he has contributed to the Travel section of the New York Times today I realize we are due to extend another invitation, this time for him to join us at Chan Chich Lodge in Belize:

A Botanist in Swedish Lapland

The plan was to retrace part of a journey that Carl Linnaeus made in 1732 when he was 25, from Uppsala, just north of Stockholm, to the northernmost region of Sweden, known as Swedish Lapland. Linnaeus kept a detailed journal of his travels, often called his “Lapland Journal,” with maps of the mountains, rivers and lakes, drawings and his squiggly handwriting. END_OF_DOCUMENT_TOKEN_TO_BE_REPLACED

When we invited James Prosek to Kerala it was in part due to his artistic sensibility with eels, and a year after that invitation we gave that peculiar but enchanting sensibility more attention.  But by then we had already noticed his bird work at the Cornell Lab of Ornithology, which Seth had watched as it went up, and his family went to inspect at the time of his graduation from Cornell. And so while Prosek has a long history with aquatic conservation Raxa Collective had a new view of Prosek that gravitated to his work with birds.

We are now glad to be reminded of his aquatic passions, in a blog post about conservation by Silvia Killingsworth, the managing editor of The New Yorker, where Prosek features as one of several consulted experts on the fate of the “lowly” eel, which turns out to be much more fascinating than expected (do read the post from start to finish for both conservation and foodie reasons): 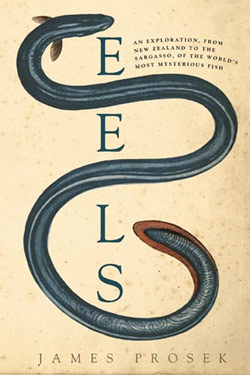 …Both the Japanese and European species have been listed as endangered by the International Union for the Conservation of Nature.

And yet, according to James Prosek, an artist, naturalist, and the author of the book “Eels,” the American eel will never be listed under the Endangered Species Act. The E.S.A, Prosek told me last week, “works well for creatures that could go down to a population of six hundred, and eels will never get down to that. Maybe a million, and that won’t be enough to sustain collective consciousness”—it won’t sound bad enough to make the public care. END_OF_DOCUMENT_TOKEN_TO_BE_REPLACED