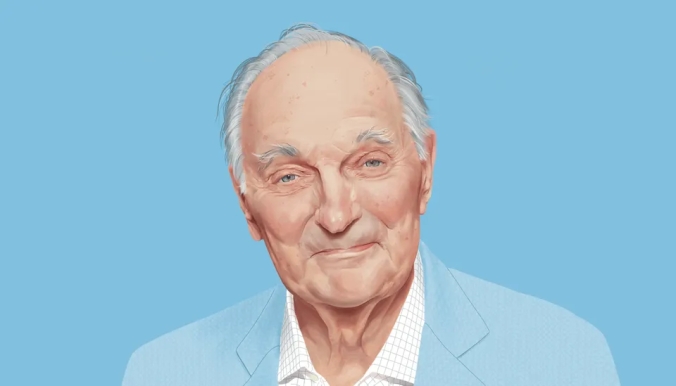 Alan Alda was not likely to appear in our pages before, even though we knew about this work that he has been doing starting some years ago. Not likely because celebrity is more often than not a distraction. But this conversation is worth sharing, because we care about science, and effective communication about science:

The actor and director talks about his podcast, the comedic chops of Volodymyr Zelensky, and being called an “honorary woman.”

Few actors inspire the warm fuzzies like Alan Alda. At eighty-six, he’s still the platonic ideal of “nice dad”: the type of guy you’d find in a cardigan, reading a copy of the Sunday Times in an armchair. But the popular image of Alda doesn’t cover the remarkable breadth of his career. END_OF_DOCUMENT_TOKEN_TO_BE_REPLACED

We have featured work by Elizabeth Kolbert since the earliest days of this platform, about twice a year. A year ago we linked to The Fate of Earth, which remains a favorite.

She has chosen to focus her work on the existential environmental challenges created by mankind, and unflinchingly reports on what we collectively are, and more often are not, doing about those challenges. The word doom always comes to mind when I see her name or think about her work. Today I am recommending this rare interview with her, in which she shares personal reflections on what it is like to do the work she does, and about 40 minutes in touches on how and why she persists with her work, even knowing that most people simply cannot bear to face the facts she is presenting:

Elizabeth Kolbert, author of Field Notes from a Catastrophe: Man, Nature, and Climate Change and The Sixth Extinction: An Unnatural History, is a staff writer at The New Yorker.

“I still nurse the idea in my heart of hearts that something you write, that there’s some key to this all. END_OF_DOCUMENT_TOKEN_TO_BE_REPLACED

Derek Thomson and his Crazy Genius crew over at the Atlantic’s podcast division have hit on a winning formula, at least for me. They take a big issue question we hear about and think about frequently, like the question of what to do about meat consumption–as in what to do about the extremely obvious problem of meat consumption levels–and they apply some creative pod knowhow. One of the best motivators for going meatless, or at least eating less meat, that I have come upon in ages.

Will We Ever Stop Eating Animal Meat?

Americans eat more meat now than ever. That’s a problem for the planet’s future. Animal farming takes up 30 percent of the earth’s landmass (the equivalent of Asia), and livestock causes one-sixth of global greenhouse gas emissions. We need more than moral arguments against meat. We need a technological revolution in better, cleaner food.

If you do not have half an our for the podcast, take five minutes to read the summary here:

There are two big truths about eating meat from animals.

First, animal flesh imposes a high moral and ecological price for a tender medallion of food. Factory farming incurs the torturous treatment of millions of chickens, cows, and pigs each year. This constitutes a rolling moral catastrophe. What’s more, one-sixth of the world’s greenhouse gas emissions are directly attributable to raising livestock, and the figure is rising as more countries enter the global middle class. For most Americans, cutting meat out of their diets would reduce global warming more than giving up driving. END_OF_DOCUMENT_TOKEN_TO_BE_REPLACED 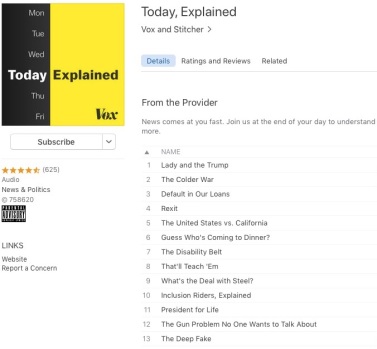 Nearly one month ago, Vox launched a new way for us to source stories. We have sourced from their website when the story fits our mission. For us to scan the news daily and link to at least one article or book review or other media that seems consistent with our mission, we increasingly bump up against the fact that producers of and channels for accessing relevant information seem to be increasing faster than we can possibly keep up.

Today we sampled from their sonic venture, a story about changes way up north, wrought by climate change, geopolitical ambitions, head in the sand-ism and other intrigue. Finding an episode like this one stretches our horizons in a healthy, productive manner:

There’s a new Cold War being fought in the North Pole between the United States and Russia (but also China, Finland, Norway, Canada, Greenland and more). Fueling the battle is the melting Arctic, which just had its warmest winter in recorded history. Vox’s Brian Resnick gives us the science before Yochi Dreazen takes us to the war.

It must also be mentioned that having outlets we trust recommend other outlets is a must. And here is an example of one we appreciate:

“Today, Explained”: An Edgy New Vox Podcast to Compete with “The Daily”

Podcast-wise, 2017 was arguably the year of “The Daily,” the beautifully produced, gently voiced narrative-news offering from the Times, hosted by Michael Barbaro, which started last January and quickly became indispensable. The show, which parses a different news story in each episode, through a conversation with a reporter or other guest, then delivers a brief news roundup, has sufficient perspective and empathy that it produces in its listeners an intoxicating, if temporary, feeling of sanity; by now, its theme song alone cues in me a Pavlovian calm. The show garners 4.5 million unique listeners each month; in April, it will expand to public-radio syndication. END_OF_DOCUMENT_TOKEN_TO_BE_REPLACED

We, among millions of others, had to have a listen. It would be useless to comment on it, but we pass it along to the few people who have not yet heard about it. The only comment here, besides the advisory that it was produced for a mature audience, might be the conclusion that in the model mad series we have been running, this one takes the cake. Maybe with this one we need to close out that series. Until we see something better, that’s it.

We are reminded of this episode of a podcast dealing with concrete’s surprising awesomeness, with some new science to add support:

Concrete jungles can soak up carbon

Cement has a bad rep in environmental circles. That’s mainly because its production creates 5 percent of the world’s industrial carbon emissions. But a new study gives this climate rogue a bit of a reprieve. END_OF_DOCUMENT_TOKEN_TO_BE_REPLACED

After a few of us listened to the first few podcasts recommended in this earlier post, we started poking around the Gimlet website. We found this. Wow. Did you see the movie called The Big Short?  If so, and if you found it awesome, there is a high probability that this podcast will work for you. Both Adams worked together on that film, one as the improbable director (whose other movies, all lowbrow forms of “humor” you would not have seen promoted on this site) who showed a level of genius transforming dry into crisp; the other was an advisor on the film because of his proven ability to make dry money-related things seem crisp. So, no huge surprise that they can make unlikely topics pop. END_OF_DOCUMENT_TOKEN_TO_BE_REPLACED

Alex Blumberg was only vaguely familiar to me when I listened to an interview with him on a podcast series that accompanied my early morning bicycle rides in late 2015. I had listened to Planet Money on occasion, and found it amusingly interesting most of the time. I had rarely, if ever, listened to This American Life, though many friends had recommended it.

Blumberg caught my full attention in this conversation recorded in October, 2014 as he described the process of sharing his experience starting up a new company. END_OF_DOCUMENT_TOKEN_TO_BE_REPLACED