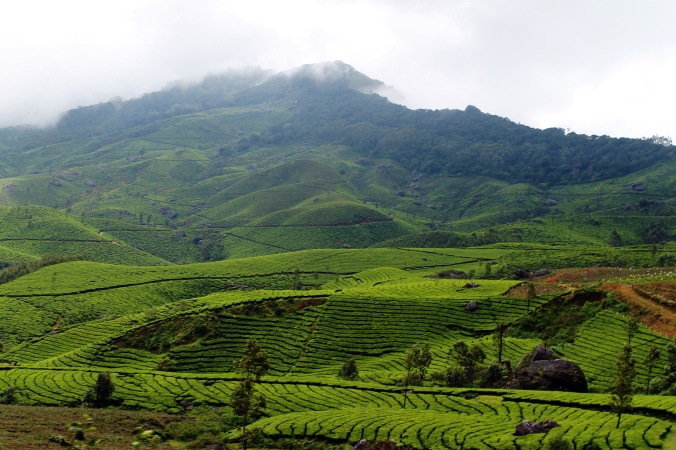 We’ve lived in India a year now (more on that in another post) and for much of this time I’ve wanted to visit Munnar, the iconic tea-laden hill station in the Western Ghats.  Most of our mountain excursions have been to Thekkady, a place we’ve grown to love for its proximity to the Periyar Tiger Reserve, and the team we work with at Cardamom County.

This weekend we had the best reason for a change of route–to scout a prospective organic farm that might join our portfolio of properties under management–so I was looking forward to also discovering the differences between these two hill stations.  I did in fact find something different in Munnar, but not in the way I was expecting it.  The landscape was other worldly, with its scattered building-sized boulders surrounded by verdant tea.  But at the same time it reminded me of the high ranges of Guatemala, equally misty, covered with terraced coffee plantations, cala lilies and yes, cardamom; or of the steep roads leading up to Volcan Poás or Irazú in Costa Rica.  The combination of winding switchbacks, mist, erratic rocks and roadside produce vendors had a distinctly Latin American feel for some reason.    I could picture the piles of strawberries in season near Poás, or the coffee drying by the side of the road in the Guatemalan highlands. 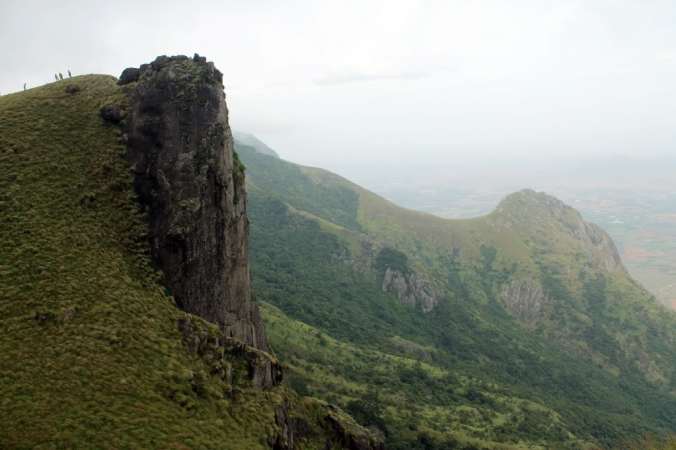 When we drove past the first waterfall this feeling of familiarity was confirmed by the sight of numerous roadside stands sporting small fires for roasting corn of all things.  Tender young husks were lined up ready for the fiery altar, denuded of their green wrappings as required by a customer.  The vendor would skewer the ear and lay it over the fire, turning it until roasted and then with a quick flick of the knife would remove the charcoal, followed by a rub with a halved lime dipped in spicy masala.

Corn grows in India…although this new world crop is relatively rare to see.  So it was surprising to find it so ubiquitously on the Munnar roadsides along with carrots as lusciously orange as the halvah in a Cochin bakeshop.

And cardamom, one of the oldest of old world crops grows in the high hills of Guatemala, plucked by Mayan workers as colorfully adorned as the bangle clad ladies plucking tea and cardamom here.  When did this “south-south” exchange take place?  The Europeans had a hand in it in both cases.  Cardamom, or green gold, was brought to Guatemala by a German plantation owner in 1914, and corn was brought by the Conquistadors back to Europe along with their hauls of priceless metal, where it then spread across the continent through Central Asia, the Indian subcontinent and even China.  (Although on further research I have found a group of ethnobotanists who believe that corn’s presence in India predates this European contact.)

Either way, the mist, the mountains and the roadside maize made me feel quite at home.

(As usual, I would like to thank Milo Inman for the great photography that illustrates my posts!)

6 thoughts on “Of Mist And Maize”