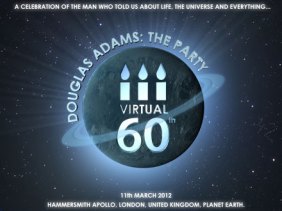 Amie, she-er than she, was a bit late on noting the birthday of one favored writer, and I, me-er than me, will be a bit early noting another.  Click on the image to the left and you will find a fun opportunity to celebrate this birthday and at the same time support conservation for these creatures, which I still have not seen in the wild but hope to one day do so, or at least participate in something like this; anyway, take a look:

11 March 2012 would have been Douglas Adams’ 60th Birthday. To celebrate this event, Douglas’ family and friends, in association with ‘Save The Rhino’ (one of Douglas’ favourite charities) are holding a very special birthday celebration in his honour at the Hammersmith Apollo in London. An evening’s entertainment from some of the finest names in the world of science, comedy, entertainment and music, with a very special premiere performance of Douglas’ material, this is one event that is definitely not to be missed.

While whiling here on Tuesday, finding more of that news organization’s past years’ coverage of Holi (note to self: today is Holi day 2012, so dress appropriately), they published this article that led me to this knowledge about the Adams party.  A fun bit of musical trivia for those of us of a certain age is in that article:

As Adams’s 42nd birthday present, David Gilmour invited him to play guitar with Pink Floyd at Earls Court. Subsequently Adams’s younger half-brother, James Thrift, heard a rumour that a film existed of this one-off moment from rock history. “I found it a month ago,” he rejoices. The clip will get its first public screening.

That article reminded me that most people who love Douglas Adams are Hitchhiker fans.  Whether you are one of those or not, I favor a lesser known work.  Click the image to the right to go to a website featuring information about that book, including links to radio versions, to the Amazonian purchase option, and plenty of trivia.

It is not clear whether the website is connected to the author’s, or whether purchasing that book will also in some manner support the estate of Douglas Adams, which in turn might support his favored conservation initiatives (if anyone knows, please comment).