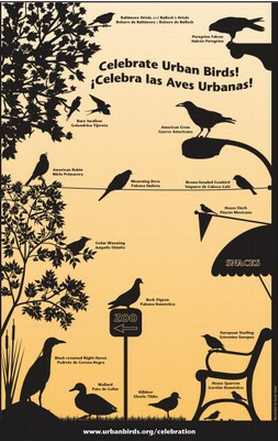 For the past year, I have been working at the Cornell Lab of Ornithology for the project Celebrate Urban Birds. Distinct from other citizen science projects the Lab of O. is involved with, such as eBird or FeederWatch, Celebrate Urban Birds (CUBs) stays true to its name and hones in on the celebratory aspect of studying birds: artwork, festivals, education, and other activities promoting community. Of course, there is still data involved. Thousands of forms have been filed—both electronically and physically—containing information on sightings of the sixteen focal species within 10-minute observation periods. These observations, along with notes about sighting location, are the source of data for the project. Participants include the address from which they are looking for birds in the ten minutes, describe the general amount of greenery and pavement in the area (as well as the size of the area itself), and list whether they saw, did not see, or were not sure about each of the sixteen species. This information constitutes a checklist that can be compiled into a larger repository of sightings in various types of green spaces around the country; the CUBs website contains species maps according to the number of observations in the last 90 days, marking where, say, a Brown-headed Cowbird has and has not been seen.

If observations are submitted frequently enough in enough areas, the CUBs program can act as a sort of informal

survey of a neighborhood’s avifauna, limited of course to the sixteen focal species. Although strict census numbers cannot be obtained from the data submitted by participants, a general analysis of trends is possible. For example, researchers might use CUBs data to determine what species are most commonly seen by casual observers, what species might be very rarely seen in a suburban neighborhood, and other such tendencies (the true estimates for population size and distribution can be found with other projects). On the CUBs website, a data page similar to the aforementioned maps lists the frequency of sightings per species—House Sparrows take the lead at 3183 sightings, and Bullock’s Oriole tails behind at 78—and this frequency table is next to a similar one listing the top ten numbers of observations submitted per state (New York 626, Pennsylvania 204). However, what leading members of the CUBs project are most interested in are the relationships communities have with their bird populations, especially taking into account the amount of green space in specific areas. The directors of the program have already established that less affluent neighborhoods tend to have lower bird biodiversity, and believe this to be correlated with the amount of greenery in these areas, which are primarily urban. Given the focal species list (American Crow, American Robin, Baltimore Oriole, Barn Swallow, Black-crowned Night Heron, Brown-headed Cowbird, Bullock’s Oriole, Cedar Waxwing, European Starling, House Finch, House Sparrow, Killdeer, Mallard, Mourning Dove, Peregrine Falcon, and Rock Pigeon), there are few species within the list itself to be easily confused even by beginners—the finch and sparrow, and the two orioles if one lives in the right part of the country, become quickly discernible after a bit of practice with simple guides, which the CUBs website frequently provides. This ease with which participants can mark whether or not they saw a species means that, for instance, an expert birder in an affluent neighborhood carrying out observations should not have a significant difference in facility for identification over a beginner in a less affluent one.

The interest that CUBs directors have in community education has led Celebrate Urban Birds to also include a concerted effort to “green” neighborhoods and create better habitat for birds. A packet of sunflower seeds is included in every kit mailed out to participants, and many gardening ideas are also provided on the website. This explicitly environmental aspect of the program, along with promotion of the arts through birds, can teach community-members about citizen science as a tool for conservation and research while deepening an appreciation of their surroundings. In my next post, I will describe how I plan to take my work for CUBs during the school year at Cornell and extend it to summer work in the Galápagos Islands, on Santa Cruz.