Many Cornell “hotelies” are multilingual; not only bilingual but often speaking three or four languages. Their coursework is in English, they may speak Spanish or French from high school education, and Chinese helps as the number of Chinese travelers increase every year. For example, my good friend from the Cornell Hotel School speaks Spanish because she is from Venezuela, speaks Chinese because her family is a Chinese-origin, speaks English just like all my classmates, and maybe she speaks some other languages that I don’t even know about. Similarly, I speak English, Korean, and some Spanish and Mandarin. So, as an hotelier, I called myself a multilingual and thought I could easily communicate with people anywhere I go. Until I arrived in Kerala.

Learning Malayalam is the first time in my life trying to learn a language that has a totally different alphabets and pronunciation.  So the experience is totally different from learning English, Spanish, or French. One of my colleagues here learned Hindi before she arrived in Kerala for her studies but Malayalam is so different from Hindi that it doesn’t help her communicate. The one thing that saved all of us (Interns from US) is that English is an official second language in Kerala so all of the resort staffs here speak English pretty well. However, most of them speak Malayalam to each other during work and speak English only with foreigners, so I thought that learning Malayalam would be a good idea to get to know the culture and people better.

Now it feels more comfortable greeting them with these Malayalam words than in English! Here are some of my everyday words:

I would often practice everything I learned that day by talking to various staffs around the property. Sometimes I visit some of Ayuraveda therapists during the tea time and have a short conversation on how they are doing and whether they have many appointments. Similarly, I always talk to All Spice Restaurant waitresses during breakfast to see them smile and laugh. I would be practicing Malayalam with them, and they would be practicing their English by interacting with me. 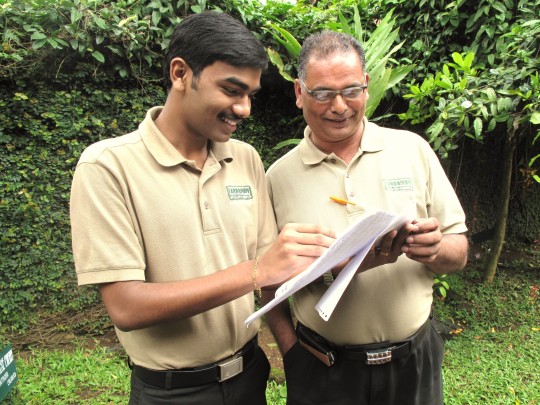 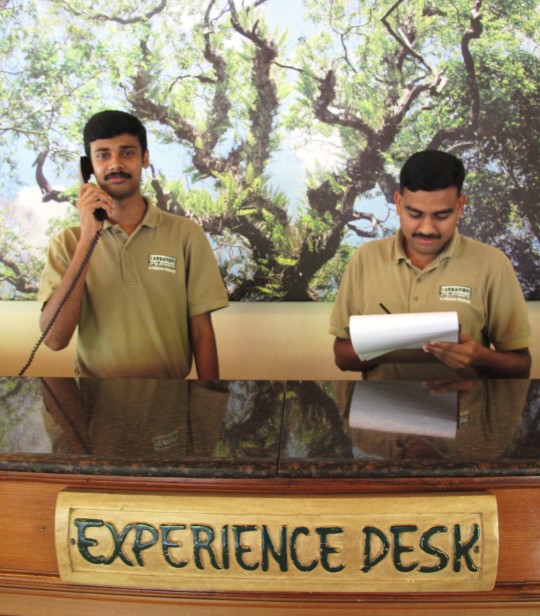 Lastly, I found a mentor/teacher, Salim, to teach me some Malayalam starting with alphabet and grammar. He gave me a children’s book of Malayalam alphabets for me to study. For several days I have tried to learn to write Malayalam but all those circles and UFO-looking letters still remain mysterious to me.

After this summer I’ll hopefully have picked up enough Malayalam that when I meet someone from Kerala in the US I’ll be able to greet them in Malayalam.