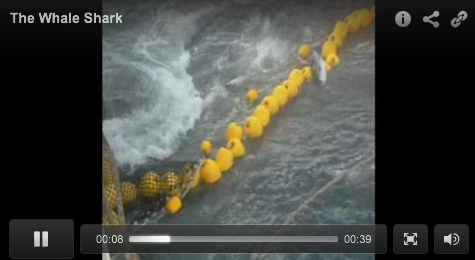 Not all marine creatures have equal opportunity of species survival.  As in any social milieu, some are better connected than others; some have benefactors to look out for them; others do not. Thanks to Green Blog, more on the protection of certain charismatic species (but not not others) in the wild blue yonder:

Whale sharks get some respect; the bigeye tuna, not so much.

That was the gist of the message from the Western and Central Pacific Fisheries Commission, whose member nations agreed this week at a meeting in Manila to help reduce whale shark deaths in Pacific fisheries. The commission did not act on a recommendation from scientists that the catch of bigeye tuna be sharply reduced.

Currently, Pacific fishing nations take in about 150,000 tons of bigeye, a sushi favorite, each year. Arguing that this number is unsustainable, scientists called for a catch reduction of up to 30 percent. But the meeting ended on Thursday with no change in the status quo, meaning that the overfishing will continue for another year at least.

In some respects, the proceedings of the fisheries commission, founded in 2004, are coming to resemble those of the International Commission for the Conservation of Atlantic Tunas, the regional fisheries management organization that has presided over decades of overfishing of the Atlantic and Mediterranean bluefin tuna. The cast of characters is largely the same, with the United States, Japan and the European Union among the prominent members.

Nanette Malsol, chairwoman of the Parties to the Nauru Agreement, a regional organization that groups Australia, New Zealand and some Pacific island nations that have agreed to tuna fishing limits, put the blame squarely on the European Union, the United States, and Japan and other Asian nations.

And in other whale shark good news, this time from Mexico, click here.