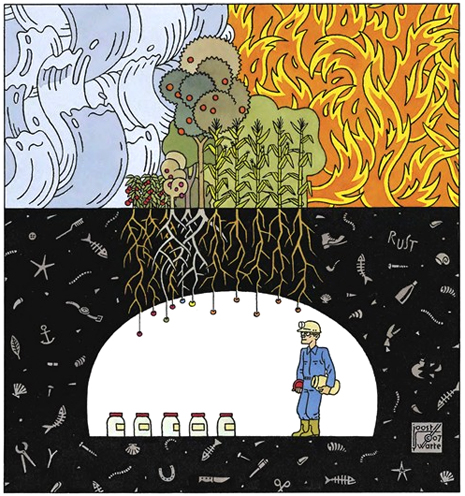 Michael Specter has written on more than one occasion on topics that are of concern to any environmentally sensitive reader, but with an unexpected twist.  Not unexpected in a “denier” sense, nor in the typical skeptic‘s perspective.  A few months back he wrote a blog post on GMOs that caught our attention for its simple explanation of a piece of legislation, and then surprised us with the notion that the proponents of that legislation (including a food writer we point to frequently) might have it all wrong. Here is another:

It has been more than fifteen years since companies like Monsanto began intense efforts to export agricultural biotechnology from the United States to the fields of Europe and the United Kingdom. The battle continues to this day. Few opponents have been more militant or effective than Mark Lynas, one of the first people to break into fields that scientists had planted with genetically modified test crops—and then rip them out of the ground.

In 1999, shortly after a London protest against poverty turned into a riot, Lynas published an article for the journal of the radical environmental group, EarthFirst!, in which he wrote that, as we entered a new millennia, two forces—a powerful coalition of multinationals and “strong social movements across the Third World’’—were on a “global collision course.’’ The agendas “of these two competing forces,’’ he wrote, ‘’were utterly irreconcilable.” The title of his article was “Savages Strike a Blow Against Capitalism,” and he was proud to count himself among the savages.

For years, Lynas clung to what can only be described as a religious conviction that GM foods were unnatural. It never mattered to him that dozens of scientific organizations, including the British Royal Academy and the National Academy of Sciences in the U.S., had studied the issue and had come to the opposite conclusion. “In my view, the technology moves entirely in the wrong direction,” he wrote in the Guardian, in 2008, “intensifying human technological manipulation of nature when we should be aiming at a more holistic ecological approach instead.”

But Lynas has written widely, and thoughtfully, about climate change, and he came to realize that he would need to rely on science to bolster his positions in a world filled with skeptics. As it turns out, it’s hard to limit a firm belief in science to one discipline. So he began to look at the science of agriculture, too. What he found changed his position and his life; and if a sufficient number of environmentalists listen to him, it may help change the lives of millions of others.