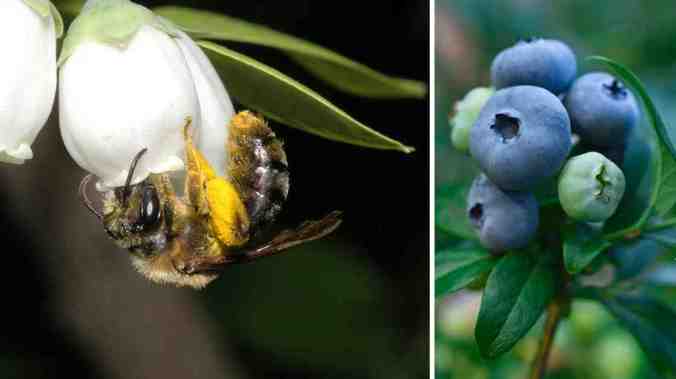 We like stories about bees for many reasons, but mostly in relation to the seemingly unrelated topics of food and collective action. In less than five minutes, this podcast news story adds important information to the mix:

Some of the most healthful foods you can think of — blueberries, cranberries, apples, almonds and squash — would never get to your plate without the help of insects. No insects, no pollination. No pollination, no fruit.

Farmers who grow these crops often rely on honeybees to do the job. But scientists are now reporting that honeybees, while convenient, are not necessarily the best pollinators.

A huge collaboration of bee researchers, from more than a dozen countries, looked at how pollination happens in dozens of different crops, including strawberries, coffee, buckwheat, cherries and watermelons. As they report in the journal Science, even when beekeepers installed plenty of hives in a field, yields usually got a boost when wild, native insects, such as bumblebees or carpenter bees, also showed up.

“The surprising message in all of this is that honeybees cannot carry the load. Honeybees need help from their cousins and relatives, the other wild bees,” says Marla Spivak, a professor of entomology at the University of Minnesota. “So let’s do something to promote it, so that we can keep honeybees healthy and our wild bee populations healthy.”

Unfortunately, a second study, also released in Science this week, makes it clear that wild bees aren’t having an easy time of it.

That study essentially follows in the century-old footsteps of Charles Robertson, “one of America’s great scientists that nobody knows about,” says Laura Burkle, an ecologist at Montana State University.

Robertson taught biology and Greek at Blackburn College in Carlinville, Ill., and he was fascinated by the close connection between insects and flowers. He spent years in the forests around Carlinville, carefully noting which insects visited which wild flowers at what time of year.

Burkle and Tiffany Knight, a colleague at Washington University in St. Louis, went back to Carlinville to see how much of the ecosystem that Robertson observed still exists today.

Much of the forested area around the town has been converted into fields of corn and soybeans — or suburbs. In the fragments of forest that remain, Burkle and Knight found all of the flowering plants that Robertson recorded in his notes a century ago. Of the 109 species of bees that Robertson saw, though, just over half seemed to have disappeared from that area.

One possibility might be a loss of nesting sites for these bees. But a changing climate may also play a role.

The bees that disappeared tended to be species that depended on just a few kinds of flowers for food. For those bees to survive, their preferred flowers have to be blooming when the bees start flying and need food. The warming trend might have thrown off that timing.

Read the rest of the story, and listen to the podcast here.