We first shared news of this fascinating species’ strange movements late last year, and since then the unusual Bubo scandiacus behavior has only been more eye-catching.

Last week, the New York Times reported that the Boston area is “seeing the largest number of snowy owls ever recorded,” and that birdwatchers had even spotted a Snowy Owl in Bermuda. See the excerpt from John Schwartz’s article below: 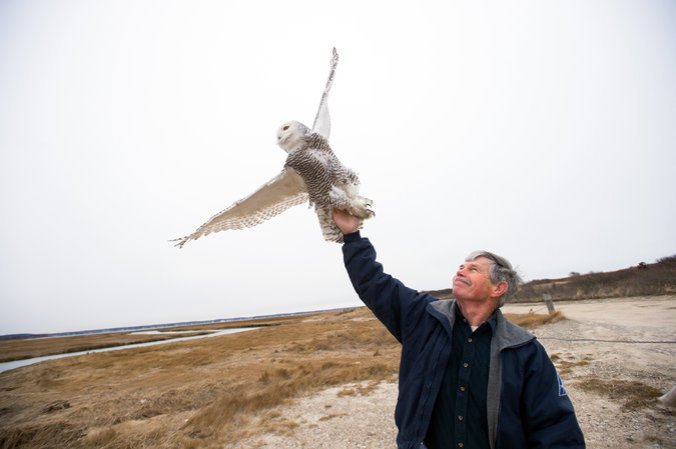 Norman Smith releasing a snowy owl in Duxbury, Mass., that had recently been captured at Logan airport in Boston. Photo by Gretchen Ertl for The New York Times

“This year’s been bizarre,” said Dan Haas, a birder in Maryland. “The numbers have been unprecedented. Historic.”

No one is sure why so many snowies are showing up in so many places — whether it can be attributed to more food in their Arctic habitats than usual, or climate change at the top of the world. “Think about the canary in the coal mine,” said Henry Tepper, the president of Mass Audubon, “you think about the snowy owl in the Arctic.”

The big birds known as Bubo scandiacus reach a height of 20 to 27 inches and have a wingspan of 54 to 66 inches. They can live more than 30 years in captivity, and have feathers that can range from mottled brown and white to pure white. They have their own movie star — Harry Potter’s Hedwig — and Internet meme, the image of a snowy asking the impertinent question “O RLY?” as in “Oh, really?”

“It’s such a charismatic bird,” said David Sibley, the author and illustrator of a series of birding guides.

Ornithologists and bird watchers are not sure why the birds have come so far and in such great numbers this year. In decades of study, Mr. Smith [who runs the Snowy Owl Project for Mass Audubon] said, “what I’ve learned is we know very little about this bird.” He suggests that the large population is a result of a bonanza of lemmings and other small rodents that snowy owls eat, perhaps a consequence of the milder Arctic weather. That led to larger population of hatchlings that must spread farther and farther out to find territory of their own.

The lemming hypothesis does not satisfy Kevin J. McGowan, an ornithologist at Cornell. He noted that tiny transmitters placed on the owls have shown some of the birds do a surprising thing in winter: Instead of flying to the more temperate south, they fly farther north and scout the Arctic ice pack for pools of open water populated by sea ducks and other waterfowl.

Climate change, which has been thawing Arctic ice so actively that new shipping routes are opening in the far north, could have disrupted the habitat, Professor McGowan speculated. “That has to be one of the most vulnerable ecosystems on the planet. That’s going to be one of the first places that falls apart when there is warming in the atmosphere,” he said. This may have driven more of them south instead of north. A big shift in bird movement one year might just be a freakish event, he said, or potentially “it’s the beginning of a pattern.”

Whatever the reason for their abundance, the snowy visitors have brought attention beyond the usual core group of birders, said Mr. Sibley, the guide author. Mr. Sibley, who has released a print of one of his snowy owl illustrations to raise money for research, said that while it is good to see such excitement, “it would be great if that kind of attention could extend to less flashy birds, like the red cockaded woodpecker or the Henslow’s sparrow.”