This is not the first time we have read about the various reasons to appreciate the horseshoe crab, though apparently we have only posted on small feature on them before. However, they play a critical role in the livelihood of another creature from a different part of the animal kingdom, as this story in the Washington Post describes:

“We had actually attached small devices that tracked their migrations,” explains Niles, “and they made 6 day flights without stopping to get to the Delaware Bay. So they would arrive completely bereft of energy, their weight would be sometimes far lower than their fat free weight, which meant they were burning muscle to get to the Delaware Bay. And the horseshoe crabs were laying eggs in such density that there was no work involved.”

Niles says the “synchrony” involved here — in which the birds managed to arrive at the Bay, from thousands of miles away, precisely when the crabs were laying eggs — was “virtually magic.” For a while, anyway. Evolution and adaptation had built a pretty good, albeit highly elaborate, survival strategy — until everything changed. 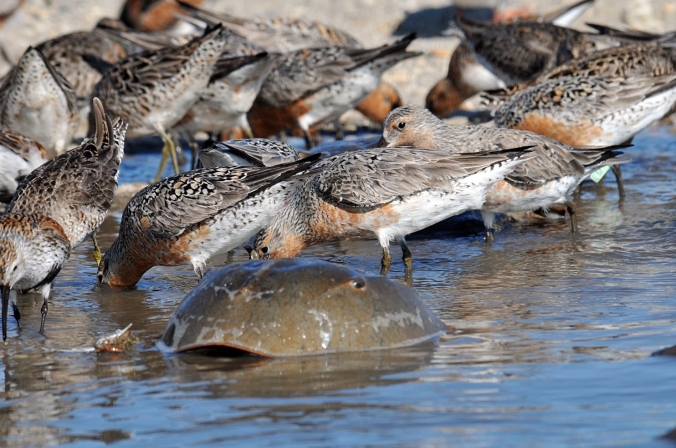 Red knots feeding with a horseshoe crab in the foreground. Credit: Gregory Breese, U.S. Fish and Wildlife Service, via Flickr.

Clearly, for all of the reasons above, the Rufa red knot is a pretty amazing bird. Is it the most amazing of them all? That’s subjective and hard to say. The Arctic tern flies farther each year (it’s also a larger bird). And there’s something pretty stunning about the peregrine falcon killing its prey through over 200 mile per hour dives in mid flight. Still, at minimum, the extremity and Hail Mary accuracy of the Rufa red knot’s long distance flights have to win some serious respect — and some serious concern for its plight.

The horseshoe crab population collapse, and its after-effects, is the most immediate reason for the Endangered Species Act listing of the Rufa red knot (one of six subspecies of the red knot found around the globe — all of which are struggling, Niles says). But on top of the crash at the Delaware Bay, there are also many other changes along the birds’ vast flyway, and some of those involve climate change.

The birds breed in the Arctic, the region of the world that, more than any other, is being dramatically altered by climate change. Global warming is driving more Arctic storms, suggests Niles, which can wipe out young chicks. In addition, climate changes in the Arctic are disrupting lemming populations, notes Fish and Wildlife Service biologist Wendy Walsh, which is leading to “changes to the predation pressure that the birds face when they’re on their breeding grounds.” If the predators that used to dine on lemmings — including snowy owls and a number of other birds — can’t get them, they may start to prey on red knots instead.

Meanwhile, there’s also the encroachment of sea level rise on the birds’ habitat, notes Walsh. As a result, the Rufa red knot has now made history — it is the very first bird listed under the Endangered Species Act with climate change cited as a “primary” reason for the listing. Other animals that have been listed for climate reasons include the polar bear, a number of species of ice seals, and 22 species of corals that are threatened by warmer waters and ocean acidification (also caused by global warming).

This may be just the start for the listing of threatened and endangered avian species. Molly Matteson, a wildlife biologist with the Center for Biological Diversity, observes that the group has “petitioned for other bird species that have climate change as one of their threat factors. It hasn’t happened yet.” According to the National Audubon Society, nearly half of U.S. bird species may be threatened by climate change in this century.

As for Moonbird? By now, says his biographer Phil Hoose, he should be back in Tierra del Fuego; we may hear a report of his arrival any day now. When it’s winter here in the northern hemisphere, it’s summer in the southern — a fact that helps explain how the Rufa red knot’s vast migration evolved.

“This is a real marathoner,” says Hoose. “This is one of the most spectacular migrations available in bird life.” For now.