We have a strong reaction of affinity with the theme of this op-ed essay in the New York Times from an author, an avid birder, we think highly of: 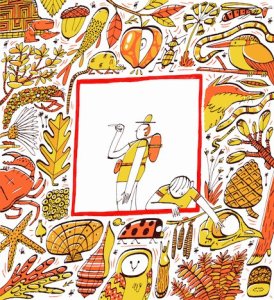 Anyone over the age of 40 who went to school in Britain will know what a nature table is. Almost anyone younger than that will not because the nature table — the classroom altar or grotto made of child-gathered natural treasure — is no more. From the age of 7 to 11, I was a major contributor to the one in my suburban junior school. I mostly brought old nests like various leafy crowns, but also a squirrel’s drey, a wren’s foot and a goldfinch’s wing. My classmates came with furry catkins in jam jars, bunches of wilting bluebells, smooth chalk pebbles and knuckle-bone flints, broken empty eggshells, some fox footprints in tar prised from the gutter of a side road, and once — most memorably — a dead twig with a butterfly chrysalis that, during a warm afternoon’s mathematics lesson, hatched into a peacock and glided over our sleepy heads like a magic carpet.

Nowadays nature tables are not welcome in schools. They are deemed dirty, perhaps dangerous, and potentially illegal…

We also know from Tim Dee’s most recent book that this theme is one he will keep harping at us:

“In his first book since The Running Sky Tim Dee tells the story of four green fields.  Four fields spread around the world: their grasses, their hedges, their birds, their skies and their natural and human histories.  Four real fields – walkable, mappable, mowable and knowable, but also secretive, mysterious, wild, contested and changing.  Four fields – the oldest and simplest and truest measure of what a man needs in life – looked at, thought about, worked in, lived with, written.

These four fields, which he has known for more than twenty years, are the fen field at the bottom of his Cambridgeshire garden, a field in southern Zambia, a prairie battlefield in Little Bighorn, Montana, USA, and a grass meadow in the Exclusion Zone at Chernobyl, Ukraine.  Meditating on these four fields, Dee makes us look anew at where we live and how.  He argues that we must attend to what we have made of the wild, to look at and think about the way we have messed things up but also to notice how we have kept going alongside nature, to listen to the conversation we have had with grass and fields. Four fields is a profound, lyrical book by one of Britain’s very best writers about nature.”

The Guardian | The Independent | The Times | The Observer | The Economist

…When signs are needed to explain wonders something has gone wrong. My home today is on the edge of the fens in eastern England and near a nature reserve that is being made from some fields that grew leeks until a few years ago but are now being rewilded by being flooded and returned to the swampy grounds they once were. Good things have happened. I saw a pair of mating cranes there. But to restore nature involves a lot of pipes. I’ve seen them on the fen. And the truth is that rewilding involves as much human interference as growing leeks. The nonce word should alert us to the sleight of hand. A sort of nature-facility is being made and dressed up as a return to a wilder past.

Furthermore, without knowing it we have forfeited our rights to be in these places in any way that isn’t mediated. The raised walkway is good for my shoes, but all the living ordinariness of a path through a place is banished along with muddy feet. An exclusion zone is being conjured beyond the signs announcing what might be there. A new type of alienation has already been devised: the feeling of tristesse that comes over you in a hide. Nothing seen from its bunker seems as real as it does when seen from under the sky.

The reserve has released something unexpectedly metaphysical onto the fen: an inadvertent description of our profound separation from a place, a terminal version of pastoral, the darkest arcadia, an idea of life after us and life without us…

One thought on “Tending Our Fields”