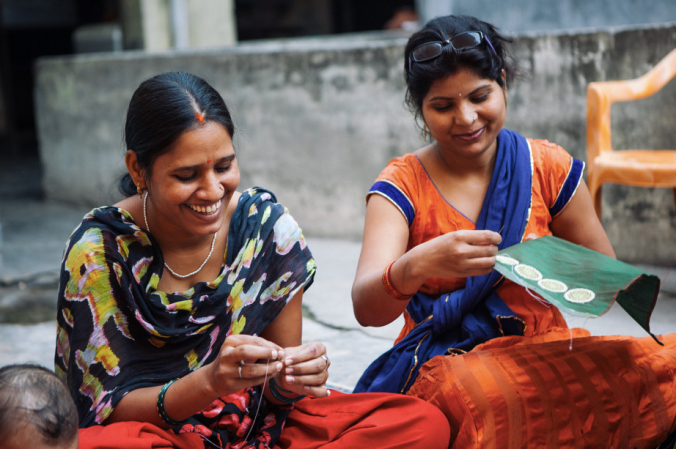 Attention to detail is a highly prized attribute in all aspects of the work we have been doing in India since 2010, and we hope it doesn’t seem pedestrian to extend that concept to something as commercial as shopping. Some people may beg to differ, but there are many cases where the “consumer transaction” is so much more.

We’ve spent many happy hours in exploration to find sustainably produced, cottage industry items. A trip to Gujarat led us to the Kala Raksha Trust. Walks in Cochin led us to the Vimalalayam Convent School, and the NGO A Hundred Hands has introduced us to many of the wonderful craftswomen whose products we highlight, including designer Usha Prajapati from Samoolam.

We’ve been great fans of the results of her work with the women of Bihar from the moment we saw it, and hearing her personal story adds a beautiful dimension to the concept of “self-help”. Thanks to FvF (Freunde von Freunden) for their inspiring online interview.

Samoolam, Usha’s design collective, which is making a name for its beautiful hand-crocheted lifestyle products, is incredible not just because its founder is young, talented and inspiring, but because its process of creation is held together by a network of strong and talented women much like her – women who make things happen, who are changing their worlds, one crochet bead at a time.

Like most women who were born to change the world, Usha is stubborn. She always has been. Not in the petulant, demanding manner of a young child, but resilient, like the old tree back home. When she first left the tiny district of Gaya at 19, to join the cosmopolitan and highly reputed National Institute of Design at Ahmedabad, she was terrified, almost paralyzed at the culture shock.

“When I got to the campus for my interview and saw the girls decked out in these crazy costumes – high heels, transparent shirts, big eye make-up and red lips like nothing I had seen on the television or the magazines – I was standing there in asalwar kameez with oiled hair. I looked around me and thought: This is a crazy place. I’ll never belong here.”

Neither her lack of fashion sense nor her inability to speak English though, could keep Usha from the world of design. The interview panel at NID was stunned at her unselfconscious honesty and confidence about growing up in a village – with a house full of siblings, a father who was a garage mechanic and a mother who milked cows and harvested grain – Usha was cut from a different cloth. Her parents were illiterate, but all of Usha’s siblings had left Gaya for higher education. Her composure was incredible. When one jury member tried to rattle her by ridiculing her poor English, she said “We’re in India, aren’t we? It isn’t my problem that I don’t speak English, it’s yours that you don’t understand my language.”