The epics of Ramayana and Mahabharata find their meaning and origin on Indian soil but their reach goes beyond the subcontinent. And the British Library’s archives find evidences of these in Malay literary traditions.

The great Indian epics the Ramayana and Mahabharata were known throughout Southeast Asia, but it was the Ramayana that most profoundly influenced Malay literary tradition. One of the oldest Malay manuscripts in a British collection is a copy of the Hikayat Seri Rama in the Bodleian Library, Oxford, which bears the ownership inscription of Archbishop Laud dated 1633. The British Library holds a manuscript of Caritra Rama, “The story of Ram”, in romanised Malay, which was copied in Surabaya in 1812.

There are however also Malay versions of the Mahabharata, some of which probably entered Malay as abbreviated prose renditions of the Old Javanese Bhratayuddha. The earliest, Hikayat Perang Pandawa Jaya, “The tale of the war of the victorious Pandava”, was composed some time between the late 14th and early 16th century, and is mentioned in the Bustan al-salatin of Nuruddin al-Raniri composed in Aceh in 1638. 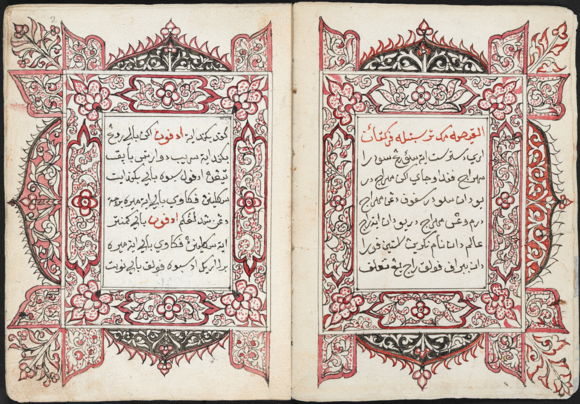 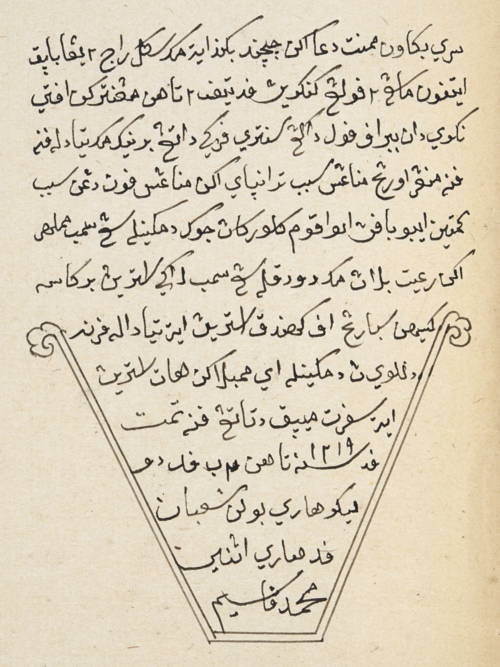 Simple finialed black ink outlines enclose the colophon of Hikayat Perang Pandawa Jaya giving the date of copying as 22 Syaaban 1219 (November 126, 1804), in the year ba, on Monday, and the name of the scribe as Muhammad Kasim. British Library, MSS Malay B 12, f. 117r.
An illuminated manuscript of Hikayat Perang Pandawa Jaya (MSS Malay B 12), with brightly decorated opening frames, was copied in 1804, probably in Penang, by Muhammad Kasim. In the following year, the same scribe is known to have copied an illuminated manuscript of Hikayat Muhammad Hanafiah (MSS Malay B 6) which is also in the British Library. The epic tale revolves around the war between the Pandavas and the Kauravas, brought about by a fateful game of dice which the Kauravas win by deceit, and is presented in three parts.

The second part of the work, entitled Hikayat Pandawa Jaya, “The tale of the victorious Pandavas”, tells the story of the Pandavas’ victory in the great war, and this part is also contained in another manuscript in the British Library, MSS Malay B 4.  According to the colophon on f.90r, this manuscript was copied on 10 Rabiulawal 1220 AH (June 8, 1805) in the reign of Sultan Ahmad Tajuddin in Kota Setar Dar al-Aman. It was conventional practice in a number of Malay states to accompany the toponym with an honorific epithet in Arabic, such as Palembang Dar al-Salam, “Abode of Peace”, and  Perak Dar al-Ridwan “Abode of Grace”, but no other Malay state is known to have had as close an association with its epithet as Kedah had with Dar al-Aman, “Abode of Security”, to the extent that the term Dar al-Aman alone is often used to refer to the state. 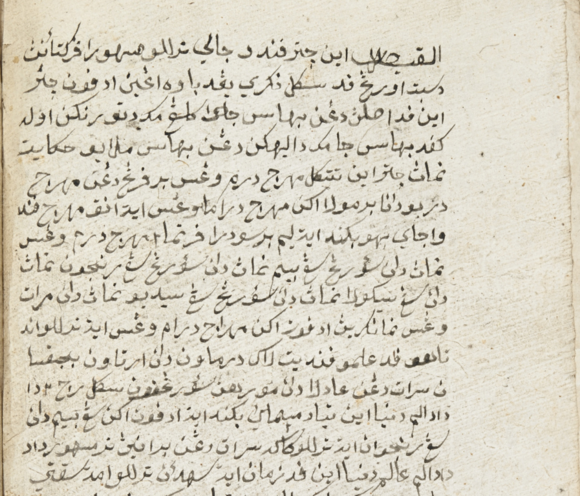