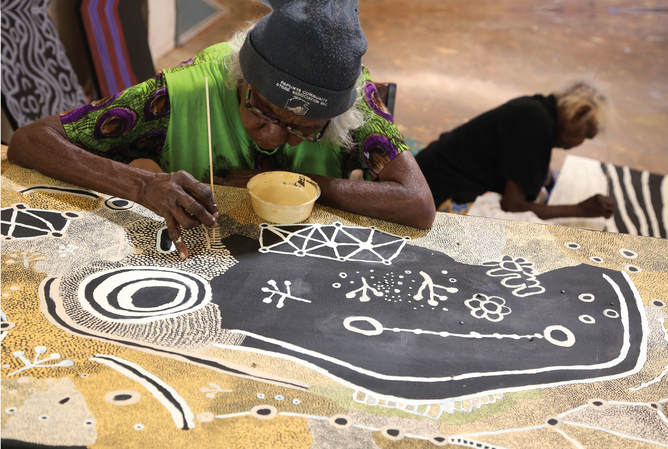 Have you heard of Papunya? The birthplace of what is touted as the century’s greatest art movement? The Conversation looks at how the movement has given birth to indigenous artists’ collectives, transformed communities, empowered women and forms a grand narrative on Aboriginal art:

The emergence of ‘dot’ paintings by Indigenous men from the western deserts of Central Australia in the early 1970s has been called the greatest art movement of the twentieth century.It all changed at a place called Papunya. Papunya was a ‘sit-down’ place established in the early 1960s, 240 kilometres northwest of Alice Springs in the Northern Territory (NT). The settlement brought together people from several western desert language groups: the Pintupi, Warlpiri, Arrernte (Aranda), Luritja, and the Anmatyerr, who were unaccustomed to living in close proximity to each other. Papunya was described as a ‘centralised government settlement established as a marshalling point for Aboriginal people displaced from their traditional lands’ (Curator Hetti Perkins, Papunya Tula: Genesis and Genius, Art Gallery of New South Wales– external site, 2000).

In 1971 art teacher Geoffrey Bardon had been appointed to the school at Papunya. He had found a dispossessed and dispirited community, struggling to maintain cultural practices against the full force of assimilationist policy. A simple school mural project brought him into contact with senior men who were custodians for the Tjukurrpa (ancestral stories). Although Bardon encouraged the children to draw their own stories, the senior men did not permit them to do the drawings. The senior men’s mural (known only through photographs as it was painted over by the administration soon after it was made) started the process of transcribing body markings and sand drawings onto more conventional painting supports. The so-called ‘dot and circle’ style had been born.

Bardon encouraged the elders to paint using ‘no whitefella way.’ Painting The Honey Ant Mural(June–August 1971) empowered them, and they began to make small paintings of their Tjukurrpa on any available surface, including scraps of board and corrugated iron. Bardon supplied them with acrylic paints and canvas, and by early 1972 a painting area had been set up in the storeroom of the Town Hall hut.

In the short time that Bardon was at Papunya, he took detailed notes about the images they created. These notes described the motifs and symbolsof a new modified pictorial language for the expression of traditional culture, and formed an iconography that is now widely understood and accepted.

The paintings visually represented knowledge about a way of life built upon Dreaming stories within the protocols of the society. The paintings related variously to the location of bush tucker, hunting grounds and water holes as well as describing travelling routes, surface features and natural forces. These ‘survival maps’ were traditionally memorised by young men as a system of survival and navigation. The artists used colour, tonality and visual balances to create a visual context and graphic meaning in the spatial distance between the forms and their interaction.

The travelling lines in the painting could imply many incidences, depiction or suppression of significant parts of a story. The loops and lines stated the relationships of places to each other. Paintings were described by Bardon by their type: water, travelling, bush tucker, dance, fire, spirit, myth, medicine and homeland (country) dreaming.

One thought on “The Art Movement of the 20th Century”