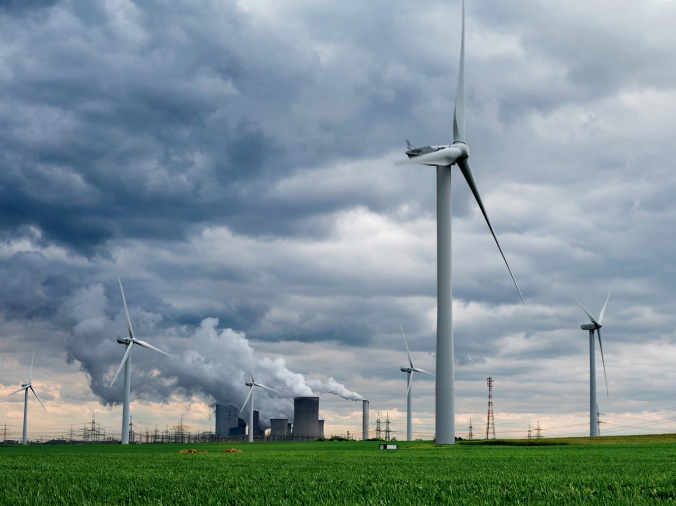 Wind turbines surround a coal-fired power plant near Garzweiler in western Germany. Renewables now generate 27 percent of the country’s electricity, up from 9 percent a decade ago. PHOTO: Nat Geo

Germany has been one of the few countries that have successfully moved away from nuclear energy. Germany has so far successfully shut down its nine units that had the capacity of generating enough power for at least 20 million homes in Europe. In fact, the contribution of nuclear power in Germany’s electricity generation has now fallen to just 16 percent and renewables are now the preferred source of electricity generation in the country.

Germany is pioneering an epochal transformation it calls the energiewende—an energy revolution that scientists say all nations must one day complete if a climate disaster is to be averted. Last year about 27 percent of its electricity came from renewable sources such as wind and solar power, three times what it got a decade ago and more than twice what the United States gets today. The change accelerated after the 2011 meltdown at Japan’s Fukushima nuclear power plant, which led Chancellor Angela Merkel to declare that Germany would shut all 17 of its own reactors by 2022.

What makes Germany so important to the world, however, is the question of whether it can lead the retreat from fossil fuels. By later this century, scientists say, planet-warming carbon emissions must fall to virtually zero. Germany, the world’s fourth largest economy, has promised some of the most aggressive emission cuts—by 2020, a 40 percent cut from 1990 levels, and by 2050, at least 80 percent.

Why is the energy future happening here, in a country that was a bombed-out wasteland 70 years ago? And could it happen everywhere?

It says they came from the dark and impenetrable heart of the forest. It dates back to the Roman historian Tacitus, who wrote about the Teutonic hordes who massacred Roman legions, and it was embellished by German Romantics in the 19th century. Through the upheavals of the 20th century, according to ethnographer Albrecht Lehmann, the myth remained a stable source of German identity. The forest became the place where Germans go to restore their souls—a habit that predisposed them to care about the environment.

So in the late 1970s, when fossil fuel emissions were blamed for killing German forests with acid rain, the outrage was nationwide. The oil embargo of 1973 had already made Germans, who have very little oil and gas of their own, think about energy. The threat of waldsterben, or forest death, made them think harder.

Government and utilities were pushing nuclear power—but many Germans were pushing back. This was new for them. In the decades after World War II, with a ruined country to rebuild, there had been little appetite for questioning authority or the past. But by the 1970s, the rebuilding was complete, and a new generation was beginning to question the one that had started and lost the war. “There’s a certain rebelliousness that’s a result of the Second World War,” a 50-something man named Josef Pesch told me. “You don’t blindly accept authority.”

Pesch was sitting in a mountaintop restaurant in the Black Forest outside Freiburg. In a snowy clearing just uphill stood two 320-foot-tall wind turbines funded by 521 citizen investors recruited by Pesch—but we weren’t talking about the turbines yet. With an engineer named Dieter Seifried, we were talking about the nuclear reactor that never got built, near the village of Wyhl, 20 miles away on the Rhine River.

The state government had insisted that the reactor had to be built or the lights would go out in Freiburg. But beginning in 1975, local farmers and students occupied the site. In protests that lasted nearly a decade, they forced the government to abandon its plans. It was the first time a nuclear reactor had been stopped in Germany.

The lights didn’t go out, and Freiburg became a solar city. Its branch of the Fraunhofer Institute is a world leader in solar research. Its Solar Settlement, designed by local architect Rolf Disch, who’d been active in the Wyhl protests, includes 50 houses that all produce more energy than they consume. “Wyhl was the starting point,” Seifried said. In 1980 an institute that Seifried co-founded published a study called Energiewende—giving a name to a movement that hadn’t even been born yet.