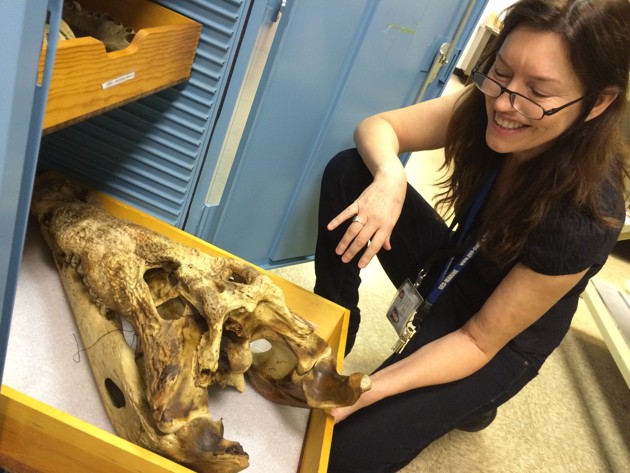 Evon Hekkala and a crocodile skull at the AMNH. Photo by Ed Yong.

We’re big fans of museums, especially those of natural history with specimens of life in the world that are invaluable to science. Now, in a piece for the Atlantic, Ed Yong (previously here) writes about the dozens of new species being identified many years–or in the case of some Egyptian mummified crocodiles, millennia–after their collection. These specimens, Yong reports, can inform us further on the evolution of animal body types, on cycles of diversity, and on the origins of epidemics, among other things:

In the darkness of the Akeley Hall of Mammals, swarms of kids gawk at beautifully staged dioramas of Africa’s wildlife. The stuffed safari, nestled in the American Museum of Natural History (AMNH) in New York, includes taxidermied leopards stalking a bush pig, preserved ostriches strutting in front of warthogs, and long-dead baboons cautiously considering a viper. In one corner, in a display marked “Upper Nile Region,” a lone hippo grazes next to a herd of lechwe, roan antelope, and a comically stern shoebill stork.

“This is my favorite one,” says Evon Hekkala, pointing to the display. “There’s a taxidermied crocodile tucked away down there.”

It takes a while to spot it and I have to crane my head to do so, but yes, there it is—a large crocodile, in the back, mouth agape, next to the hippo. It’s mostly hidden from view, and until recently, it was hidden from science, too.Five years ago, scientists would have classified it as a Nile crocodile (Crocodylus niloticus)—one of the largest of the family, and among the most feared. But in 2011, after extracting DNA from this specimen and dozens of others, Hekkala proved that the iconic species is actually two species. One had been disguised as its more widespread cousin all this time. Hekkala called it Crocodylus suchus—the sacred crocodile. It’s the species in the diorama.
Hekkala, a geneticist at Fordham University, is an evangelist for natural history museums and the many secrets that are still locked within their drawers and dioramas. In 1985, as an undergraduate volunteer at McGill University’s Redpath Museum, she was asked to re-label a set of spears collected from the Congo Basin, one of which said: Thought to have killed eleven pygmy elephants. “At the time, I thought it was kooky and sad. But then I realized that this was a piece of forensic evidence in a crime scene,” she says. These inert objects, now in her hand, were once buried deep in the flanks of living creatures. “It really changed my perspective on what museum collections could tell us.”

Read the rest of Yong’s piece in the Atlantic here.

We're excited to introduce decaffeinated beans from the Tres Ríos region to our USA market! At first we'd thought of a sloth for this label, but ended up going for an ironic hummingbird instead.
Starting the new year strong with some espresso and fresh snow!
Happy holidays from the Organikos family--we hope you have a season of love, joy, and plenty as we approach the year's end!
Coffee makes a great last minute gift for the holidays. From our hands to yours. Free shipping on orders 3 lbs and over.
%d bloggers like this: