Bamboo is a highly malleable, fibrous plant that has many impressive capabilities that often serve a variety of utilitarian needs. At Xandari, we’ve used this resilient, rapid-growing grass (yes, it’s part of the grass family and some species are known to grow up to 90cm in a single day!) to create wind chimes for birds and now, we’ve been inspired once again to create a different, yet handy tool.

One of our grounds-keeping members, Edwin, designed a pen made with a narrow bamboo stem. The bamboo is cut on the node on one end and on the internode (the hollow part of the bamboo between the nodes) on the other. The bottom end is sanded to smooth out the edges and a ball-point ink tube is inserted through the hollow end. With a small knife, he then shaved off at an angle some fiber where the bamboo meets the ballpoint metal tip to create a more finished look. To make the lid, Edwin used a slightly wider bamboo stem and cut off at the node on one side and on the internode on the other. He then finished by sanding the corners to eliminate any splinters and sliding the pen base into the hollow end. 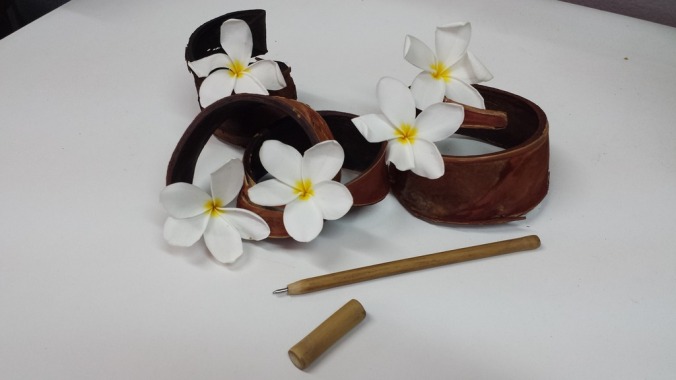