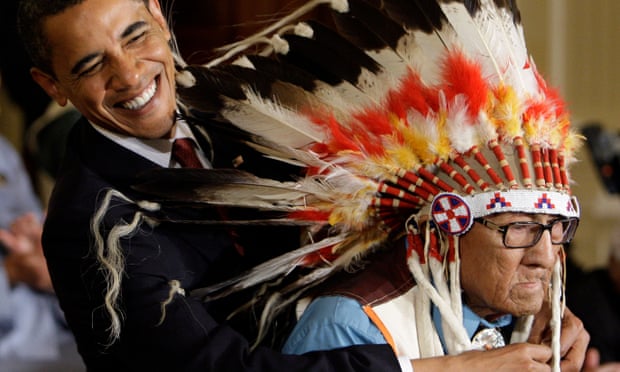 Barack Obama reaches around the headdress of chief Joseph Medicine Crow to place a 2009 presidential medal of freedom around his neck. Photograph: Alex Brandon/AP/The Guardian

The history and rights of Native Americans in the United States have held interest for us over the years, with our last story mentioning a tribe being early last month, in reference to buffalo hunting near Yosemite. Yesterday, the great Crow tribe historian, war chief, and historian Joseph Medicine Crow, who was also a second world war veteran, a holder of the presidential medal of freedom, and a nominee for the congressional gold medal, passed away at 102 years old. Aisha Gani reports for the Guardian:

Medicine Crow, who was raised by his grandparents in a log house in a rural area of the Crow Reservation near Lodge Grass, Montana, wore his war paint beneath his second world war uniform.

As a child, Medicine Crow listened to stories about the Battle of Little Bighorn – the conflict that pitted federal troops led by Lt Col George Armstrong Custer against native Lakota Sioux and Cheyenne warriors. He translated for his great uncle, White Man Runs Him, when white reporters came to interview him about the battle, and would go on to become a lifelong emissary between the Crow community and white Americans.

His grandfather, Yellowtail, raised Medicine Crow to be a warrior. The training began when Medicine Crow was just six or seven, with a punishing physical regimen that included running barefoot in the snow to toughen the boy’s feet and spirit.

As Crow tradition had it, in order to become a chief a man had to command a war party, enter an enemy camp at night and steal a horse, wrestle a weapon away from his enemy and touch the first enemy fallen, without killing him.

Thousands of miles from where the code was conceived, on the battlefields of Europe, Medicine Crow became the last person to meet the conditions. Wearing a yellow eagle feather tucked inside his helmet, he fought hand-to-hand combat with a German soldier, whose life was spared, and set off a stampede of 50 horses from a Nazi stable, while singing a traditional Crow song as he rode away.

“I never got a scratch,” he recalled about 60 years later.

“Warfare was our highest art, but Plains Indian warfare was not about killing. It was about intelligence, leadership and honour,” Medicine Crow wrote in his 2006 book, Counting Coup.

“He was my everything,” his son Ronald Medicine Crow told Billings Gazette, a Montana and Northern Wyoming website. “I don’t think I will be able to fill his boots because he was able to accomplish so much in his history.”