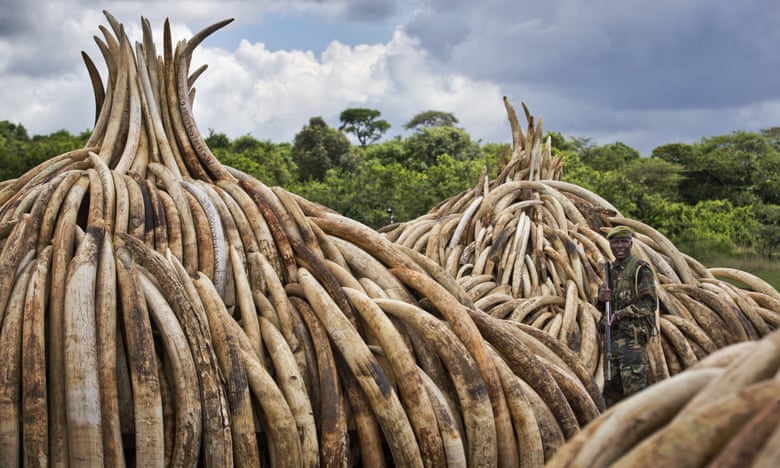 Kenya will burn about 105 tonnes of elephant ivory and 1.5 tonnes of rhino horn in 11 large pyres, about seven times the amount previously burned in a single event. Photograph: Ben Curtis/AP via The Guardian

We featured poaching a few weeks ago here, in the case of primates, and we have discussed the illegal ivory trade and other endangered wildlife on the black market before. This weekend, Fiona Harvey reports for the Guardian, Kenya burned a massive amount of tusks from poached elephants, in a symbolic act of destruction that presumably cost the black market millions of dollars, and thousands of elephants their lives:

Tusks from more than 6,000 illegally killed elephants will be burned in Kenya on Saturday, the biggest ever destruction of an ivory stockpile and the most striking symbol yet of the plight of one of nature’s last great beasts.

The ceremonial burning in Nairobi national park at noon will be attended by Kenya’s president, Uhuru Kenyatta, heads of state including Ali Bongo Ondimba of Gabon and Yoweri Museveni of Uganda, high-ranking United Nations and US officials, and charities. A wide network of conservation groups around the world have sent messages applauding the work.

On Friday, Kenyatta said Kenya would seek a “total ban on the trade in elephant ivory” at an international wildlife trade meeting in South Africa this September. “The future of the African elephant and rhino is far from secure so long as demand for their products continues to exist,” he said.

On Saturday about 105 tonnes of elephant ivory and 1.5 tonnes of rhino horn will burn in 11 large pyres, about seven times the amount previously burned in a single event. The bonfire, so big it will take about four hours to burn completely, highlights the continuing crisis in elephant populations. About 30,000 to 50,000 elephants a year were killed from 2008 to 2013 alone, according to the Born Free Foundation, and the rate of killing is outstripping the rate of births in Africa.

Prior to the burning, as much scientific and educational information as possible has been extracted, and Kenya will be left with about 20 tonnes of ivory that are still going through the legal process.

Ronnie Wood, the Rolling Stone and patron of the Tusk charity, was among celebrities speaking out ahead of the burn: “It makes me so sad to think that in another 15 years or so elephants, rhinos and even lions could have disappeared from the wild, denying our children the experience of knowing and loving them. We just cannot allow that to happen.”

Kenya first burned ivory in 1989, under president Daniel Arap Moi, as a symbol of its determination to protect its remaining elephant population, which had fallen 90% in the previous 15 years, from 168,000 to 15,000 elephants.

Read the rest of the article from Friday here.