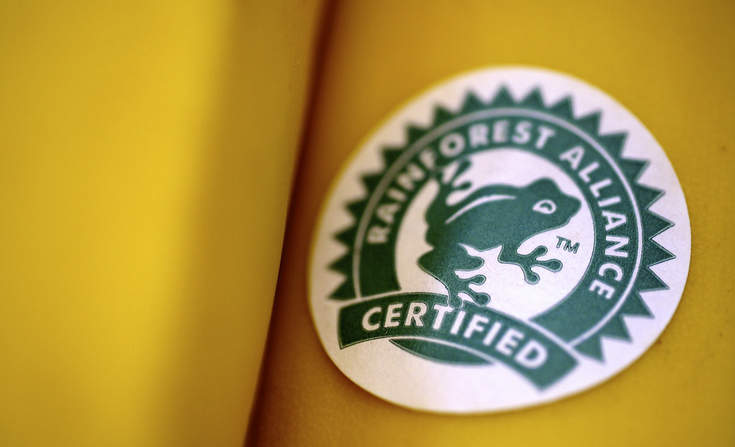 Among the farms that the Rainforest Alliance certifies are those that produce bananas, coffee, tea, pineapples, cocoa, flowers and palm oil. Photo by Flickr user Sally Crossthwaite

The Rainforest Alliance and Sustainable Agriculture Network have been doing good work, mostly in developing countries, for over twenty years to improve agricultural practices and protect natural forests. The two groups published an Impacts Report not long ago that reviews their progress, and two executives wrote an article summarizing those impacts on GreenBiz.com:

The standards prohibit conversion of forests or other natural ecosystems to cropland, protect workers and wildlife, regulate the use of chemicals and other farming practices. Today they cover more than a million farmers on Rainforest Alliance Certified farms, most of them smallholders, cultivating 100 crops on a total of 7.4 million acres (about the size of Switzerland) across 42 countries.

It’s not hyperbole to say certification has transformed the way many crops are grown in the tropics. But it’s not a panacea, nor was it intended to be. As it scales up, certification amasses an impressive list of positive impacts, but problems and practices it has not yet transformed are also thrown into sharper relief.

In El Salvador, certified farms not only had greater biodiversity in terms of migratory bird species than non-certified farms, they had about the same number of species with the same survivability rates as natural forest. In Kenya, when a certified tea farm restored native plants along a dry riverbed, the water returned, literally bringing the river back to life.

But the report also found persistent problem areas, such as managing agricultural chemicals and waste or providing adequate worker housing for certain crops in certain regions. It showed that when certified farms failed to conform to a specific requirement in the SAN standard, they corrected the problem most of the time (on tea farms in East Africa corrected 83 percent; cocoa farms in West Africa, 64 percent; coffee farms in Central America, 57 percent; banana farms in Central America, 82 percent).

Why not 100 percent, and why are there non-conformities at all? Certification never can deliver perfection. It’s a system of checks and balances that rewards improved practices while identifying and correcting unsustainable ones. As it expands globally, it improves more farms, but inevitably confronts more instances of bad practices that take time to eradicate.

Some arise from deep-seated, endemic conditions, such as widespread poverty and a tradition of child labor on small family cocoa farms in West Africa. Others may have to do with lack of money or credit access to make improvements.

By design, certification is an iterative process, taking producers on a long-haul journey to continually improve practices. So the SAN standard is continually revised. Late last year, for example, it strengthened requirements for worker training and safety, grievance mechanisms and combatting child labor.

The entire SAN standard gets overhauled and reissued periodically, with a new and improved version launching later this year. It will be more outcomes-based, focus more on key social and environmental requirements and help farmers prioritize improvements.

SAN also will change the audit and verification process, using risk analysis to target oversight where it’s most needed, and new technologies such as satellite imagery to provide better data and lower costs. That will improve compliance on existing certified farms and lower barriers to entry for more farms.

Today farms that are Rainforest Alliance Certified as meeting SAN standards produce over 15 percent of the world’s tea, 13.6 percent of cocoa and over 5 percent of coffee and bananas. But what about the rest of the world’s agricultural land? 3.7 billion acres are under cultivation globally plus 1.2 billion acres of degraded agricultural land, much of it totally abandoned, that might be restored to fertility. That’s least two orders of magnitude bigger than the total land area covered by certified agriculture.

Read the rest of the article by Ana Paula Tavares and Andre de Freitas here.

One thought on “Rainforest Alliance and Sustainable Agriculture Network”