Thanks to National Public Radio (USA) for this story:

A weathered wooden shed that holds wheelbarrows, hoes and other basic tools is the beacon of the Student Organic Farm, a two-acre swath within the larger horticultural research farm at Iowa State University.

On a warm spring evening, a half-dozen students gather here, put on work gloves and begin pulling up weeds from the perennial beds where chives, strawberries, rhubarb and sage are in various stages of growth.

So passionate, she’s now the outreach coordinator for the farm. Within her major, she says, “people want to work in kitchens and they want to work in big cities. And that is important, but it’s also important to have that farming aspect. And I think I’m very lucky to have discovered that.”

About 20 years ago, as small-scale farms on the coasts began luring shoppers with fresh produce at farmers markets and through community supported agriculture (CSA), the trend also took root here in the heartland.

The Student Organic Farm sends out boxes full of produce to the local community throughout the growing season. Student members can get a discounted subscription price if they work three hours a week in the field. 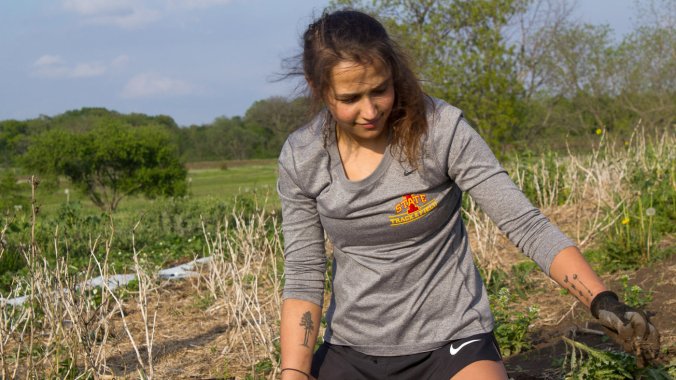 On this evening, most of the students working the farm have come from the Iowa State agronomy department.

But the appeal of working here is often independent of academic interests, says agronomy professor Mary Wiedenhoeft, who serves as an academic adviser on the farm.

“It’s hands-on learning,” Wiedenhoeft says. “And so that’s why the student organic farm is really unique.”