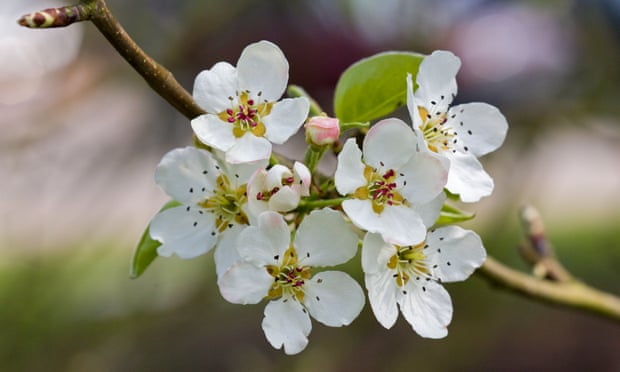 The UK has a rich history of biological recording by scientists and ‘citizen scientists’ who document the first signs of spring. Photograph: Alamy/Guardian

We first heard of the word phenology on this site back in 2012, from writings on a citizen science workshop in the Galápagos. Since then, the term has been linked to citizen science in the context of forest life cycles in England, coffee farming in Costa Rica, and orchids in the United Kingdom. It’s a good thing that there’s a history of normal people collecting information on nature’s timelines in Britain, because that provides rich and deep data on changing phenology with a warming climate. Jessica Aldred reports for the Guardian on a new study published in Nature:

Climate change is disrupting the seasonal behaviour of Britain’s plants and animals, with rising temperatures having an impact on species at different levels of the food chain, new research shows.

The result could be widespread “desynchronisation” between species and their phenological events – seasonal biological cycles such as breeding and migration – that could affect the functioning of entire ecosystems, according to the large-scale study published this week in the journal Nature.

It also warns of changes in the key seasonal interactions between species that could disrupt relationships between predators and prey and affect their breeding success and survival.

The study, led by Dr Stephen Thackeray from the Centre for Ecology and Hydrology in collaboration with 17 other organisations, analysed 10,003 long term phenological data sets of 812 of the UK’s marine, freshwater and land-based plant and animal species collected between 1960-2012 on everything from fish spawning to plant flowering.

The data was split into three levels of the food chain and spatially matched with local temperature and rainfall data, and models of seasonal timing and climatic variables, to show the variation in which species at different “trophic” levels are sensitive climate change.

“This is the largest study of the climatic sensitivity of UK plant and animal seasonal behaviour to date. Our results show the potential for climate change to disrupt the relationships between plants and animals, and now it is crucially important that we try to understand the consequences of these changes,” Thackeray said.

He said the findings highlighted the importance of managing ecosystems within a “safe operating space” that considered the likely impacts of projected climate change.

The study shows that seasonal events – including flowers blooming, leaves falling or animals hibernating – are generally more sensitive to temperature rises brought about by climate change than to changes in precipitation or snowfall.

But the “direction, magnitude and timing of climate sensitivity” varies significantly among species in different groups or levels of the food chain, the study showed.

Secondary consumers (such as predatory birds, fish and mammals) were consistently less sensitive to climate variations than species at the base of the chain (such as seed-eating birds and herbivorous insects), which were twice as sensitive to temperature.

Using estimates, the study predicted that by 2050, these primary consumers will have shifted their seasonal timing by more than twice as much as species at other levels of the food chain — an average of 6.2 days earlier compared to 2.5­­–2.9 days earlier.

Many long-term ecological changes have been attributed to climate change, and shifts in the seasonal timing of reproduction and migration have been well-documented. The most recent report from the Intergovernmental Panel on Climate Change (IPCC) found that in recent decades, many plant and animal species have moved their range, changed numbers or shifted their seasonal activities as a result of warmer temperatures.