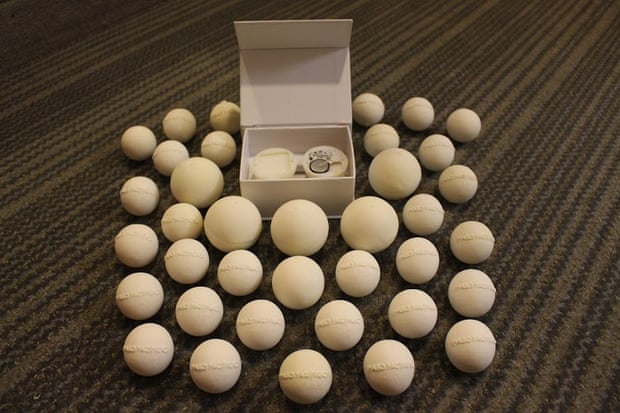 Prototypes of Paso Pacifico’s fake eggs. The small balls on the outside hold the GPS transmitter which will then be fit into the larger shells, forming the inner ring of the photograph. Photograph: Eduardo Bone via The Guardian

Last time we mentioned sea turtles it was also in the context of protecting them from poaching. These threatened ocean species lay eggs on public beaches and certain people enjoy eating those eggs, or even the turtle meat itself. Thanks to a great project by USAID called the Wildlife Tech Challenge, there will soon be a potential means to tracking where poachers are selling the illegal turtle eggs, as Jeremy Hance reports:

“Every year millions of sea turtle eggs are taken by poachers for sale on the black market. Paso Pacifico’s solution has the potential to reveal the trade routes and destination markets for trafficked sea turtle eggs,” the U.S. Agency for International Development (USAID) said.

Out of control poaching

Paso Pacifico, which works in Central America’s Pacific region, plans to test their fake eggs first on the beaches of Nicaragua, where Williams-Guillen described the poaching of sea turtle nests as “uncontrolled, unregulated, extensive and contested.”

The situation is so bad that even the best-protected beaches are plundered to some extent and it’s not uncommon to see poachers digging up nests just meters from tourists watching sea turtles laying their clutch at night, according to Williams-Guillen. This poaching becomes particularly frenzied when olive ridley sea turtles show up for the arribadas (a Spanish word meaning “arrival”). These are mass laying events where thousands of olive ridleys nest on the same beach for a single night in a biological strategy to overwhelm natural predators.

“Even with armed guards, the numbers of poachers overwhelm military personnel by ten or twenty to one,” Williams-Guillen said. “Although many poachers are locals with limited resources, during these arribadas there are influxes of gangs of poachers from larger cities outside local communities.”

She added, “these are not necessarily just local poor people without other options.”

Humans have been eating sea turtle eggs (and killing adults for meat) for millennia. However, as human population exploded and as sea turtles began to face additional threats such as bycatch in fisheries, beach development, light pollution and climate change, sea turtle populations declined precipitously. Today, all but one of the world’s seven sea turtles are considered threatened by the IUCN Red List. And the one that’s not – the flatback turtle – is listed as data deficient, which means scientists simply don’t know how it’s doing. Worse still, the species hasn’t been assessed for two decades.

For its part, Nicaragua is home to four sea turtle species: the olive ridley, the leatherback, the green and the critically endangered Hawksbill sea turtle.

Read the rest of this article from The Guardian here.