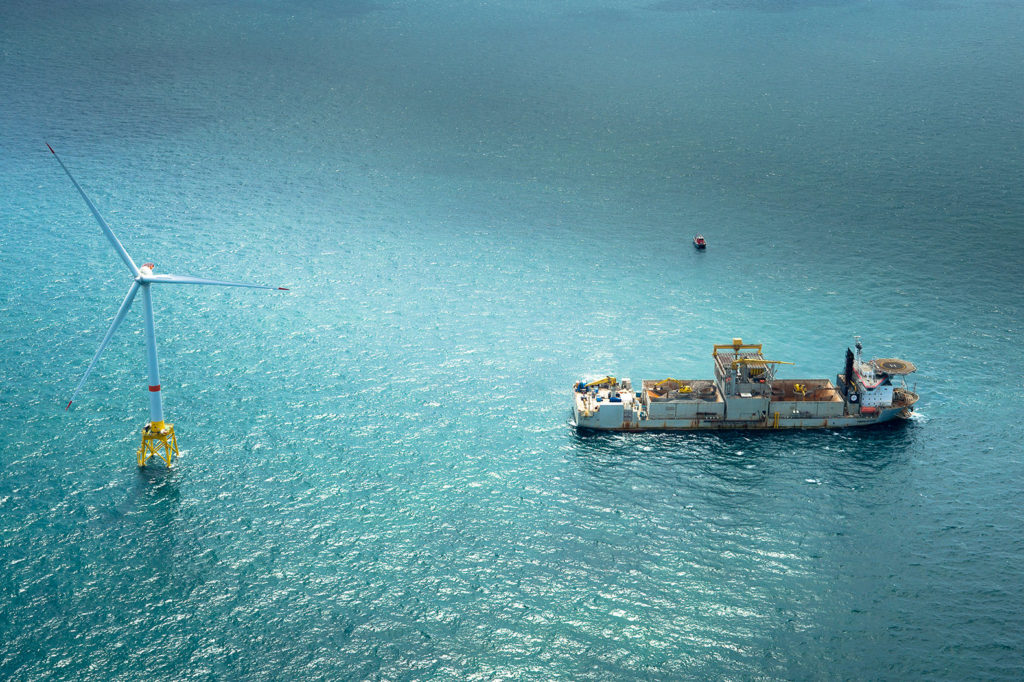 A GE Renewable Energy offshore wind turbine off the coast of Belgium. Photo © GE via Wired.com

Wind power is a recurring subject here, and although there are thousands of turbines across the United States, none so far have been built collectively along the coast. Since so much of the US population is collected in coastal areas, having electricity produced closer to them is key to reduce loss via transportation. Brendan Cole reports for WIRED about the upcoming wind farm in Rhode Island:

BUILDING IN RHODE Island isn’t easy. Hurricanes and tropical storms barrel through its quaint coastline towns, interrupting perfect summer weekends. Freezing winters bring blizzards that can shut down the entire state. And every season features corrosive salty winds, biting at the coast as if sent by a Britain still seething at the first American colony to declare independence.

But one company sees the state’s incessant wind as a utility. Deepwater Wind has partnered with General Electric Renewable Energy to build the first offshore wind farm in the United States, off the coast of Block Island. Hooked up to the grid by the end of 2016, the system could supply 90 percent of the tourist destination’s power within the next few years. But it hasn’t been easy. Designing and building spinning fans hundreds of feet tall that stay sutured to the ocean floor in the face of currents and wicked winds has taken almost three years of work.

The blades on Deepwater Wind’s turbines, which have been arriving at Block Island over the last month, will be almost 250 feet long. That means the top and the bottom of the rotors will be separated by 500 feet or more. Anything covering that much area will have to deal with widely variable wind conditions, says Cristina Archer, a professor at the University of Delaware who studies offshore wind farms. Sometimes the wind will be the same speed across the whole turbine, but that speed will change dramatically over the course of the day. Other times, the winds can be steadily 10 miles per hour faster at the top than at the bottom.1

To help protect the turbines’ machinery and electronics, engineers can lock their rotors to keep them from spinning too fast or chaotically. “If we reach some level of wind which is not acceptable,” says GE Renewable Energy project director Eric Crucerey, “then we stop the machine and the machine is put in standby.” The same happens if it gets too cold, he says. The turbines can keep working down to 14 degrees Fahrenheit; below that, they’ll go into hibernation.

But stopping the rotors doesn’t stop the wind. The surface area of each blade is about the same as a football field, so there’s a lot of air hitting the turbine and trying to topple it. To stay steady, turbines are anchored to the seafloor and to a narrow foundation dug 200 feet underground. That anchoring, with help from very strong building materials with a corrosion-resistant coating, make the turbines stable enough to hold their own against wind and storms. Crucerey says that the insides of the turbines are also pressurized, forcing out any bits of wind or salt that might try to break the wind farm up from within.