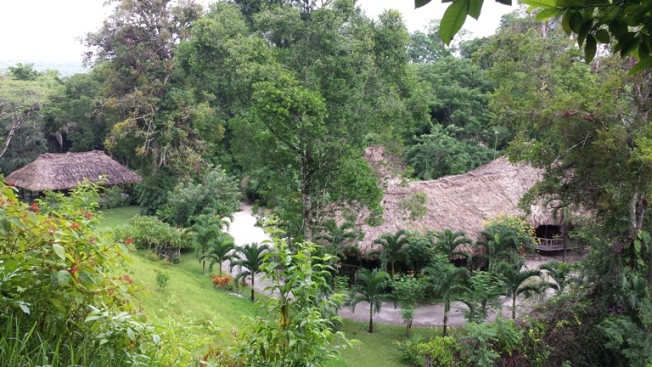 View from the top of one of the knolls (i.e., former Mayan structure) surrounding the compound

Day by day I’ve been exploring the trails around Chan Chich Lodge, and during each excursion I find some kind of surprise. I tend to tag along Seth’s bird outings not only to learn about the birds fluttering about, but also to increase the chances of spotting some type of wildlife mammal.  Certain trails are better for finding the animals that I hope to see (such as a Margay or a White-nosed Coati), but I have diversified my search in order to avoid discriminating against all the other stunning wildlife at Chan Chich and to take into consideration my birder companion’s interests.

Climbing to the top of the grassy mounds (concealing Mayan structures) that surround the central hotel area is one option that offers an elevated perspective of the lodge and allows for a less constricted view of the trees that attract Brown-hooded Parrots, White-collared Seedeaters, and Tropical Kingbirds. Most of the knolls have a bench at the top, which I believe serve more as a scenic embellishment than a respite from the twenty stair-step “hike.” At one of the mounds there is a wooden platform on the edge of the hill that provides a private outlook towards the forest canopy. I found this outlook at sunset, which made the discovery all the more memorable, and I will not reveal its precise location to encourage visitors to find it on their own. 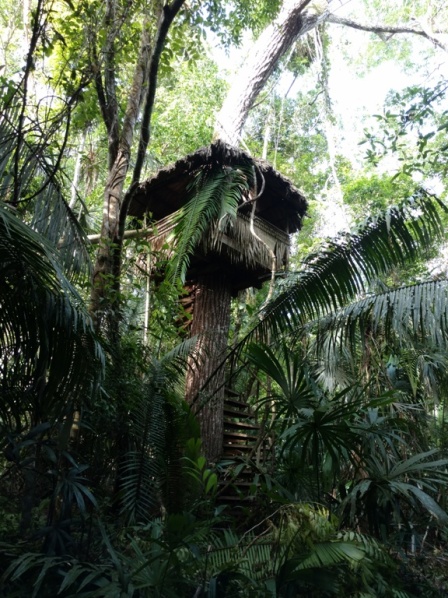 Trish’s Hill is a short trail that stems off from the paved road to Chan Chich Lodge and gently inclines to a grassy clearing where a tiny screen-walled cabin rests on the border of a hill. Coincidentally, I saw this solitary cabin during sundown (not on the same day as the platform, of course) and the orange light penetrated through the window screens and lit up the wooden interior. A round table and three chairs occupied the single room. I walked through to the balcony and I could hear the rush of a river current below, muffling the background buzz of cicadas and other insects. I gazed into the orange-blue horizon and envisioned a bucolic afternoon picnic on the balcony. Hopefully I will remember to take some snacks with me the next time I hike Trish’s hill to fulfill that vision.

From all the trails we traversed, we saw the greatest number of bird species while walking along Xaxe Venic (pronounced Sha-she ven-ick; tough, I know) path. It was also the trail we spotted the most mammals on foot. Our first sighting was a Red Brocket Deer. Still as a statue, the deer stared at us intently from the dense underbrush and remained motionless for several minutes as I fidgeted with my phone camera to try to get a blurry image that could prove my sighting (sadly, the blurry outline of the deer is not even decent enough for including on this post). It was difficult to distinguish the animal initially but with the binoculars we were able to make the visual confirmation. 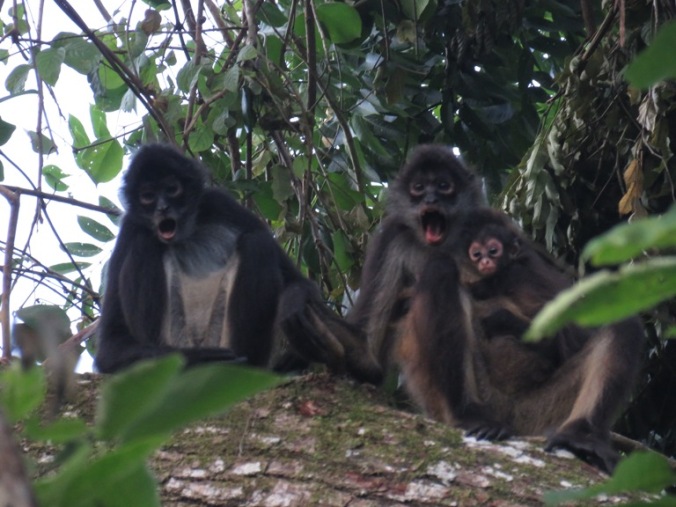 Spider Monkey family having a yawn (except for the little one). Photo by: Seth Inman

Halfway through our walk we found a spider monkey trio, two parents and a very young baby monkey. We had a clear sight to the long-limbed family and therefore got first-class view of the humorous yawning fit that engulfed the parent monkeys (the baby kept an impressive yawn-free posture the entire time). Shortly after our monkey encounter we passed by a tree house and I genuinely considered for a moment making it my new dwelling during my time here at Chan Chich Lodge. Due to limited square footage that prevents a comfortable sleep area, I reconsidered my initial thought and decided I would use it as an observation tower. Hopefully no one, or no monkey, will take my post before I do.