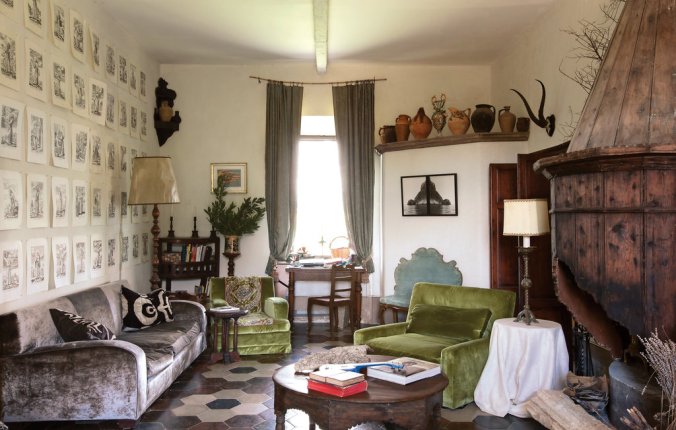 It is difficult to resist a story like this when you have recently completed a multi-year restoration.

When it involves a former convent I have a particular reason to be interested. This article had me at the mention of Patmos, one of my favorite islands, but there is more. It is that cloister, with the rose garden seen in part in the photo to the right, that intrigues me. I have noticed that in European convents, the older the better, there are rose gardens that contain strains of rose that are difficult to find elsewhere. Presumably “antique” roses, they have a fragrance that is incomparable:

Restoring a Run-Down Convent in Tuscany

A mother-daughter duo brought back to life a centuries-old house in the countryside.

For 60 years, a 16th-century Franciscan convent designed by the Florentine architect Antonio da Sangallo the Younger, a creator of both the Palazzo Farnese and the Villa Madama in Rome, had existed in a state of abandoned decrepitude. Situated on the edge of the town of Pitigliano, in southern Tuscany, with vegetation engulfing its cloisters, the house had no electricity, almost no running water and no windows. It was exactly what the mother-and-daughter duo Holly Lueders and Venetia Sacret Young had been looking for: “the perfect ruin.”

It’s not every parent and child who go seeking a house together, but neither Lueders, a designer, nor Sacret Young, a photographer, are terribly conventional. Lueders belongs to that strain of restless American expatriates who move to Southern Europe to pursue their idea of a romantic life. In the late ’70s, she was based in New York, but summers were spent converting a crumbling house on the island of Patmos in Greece. “We led a blissfully unsupervised childhood,” says Sacret Young, the youngest of Lueders’s three children. “Giving us a formal education wasn’t Holly’s priority, but we were exposed to interesting environments.”

The pair share a penchant for salvaging old buildings, and in the early 2000s, while Sacret Young was working on a mosaic for her mother’s garden on Patmos, Lueders suggested they find a place in Italy, the country where she had always dreamed of living. Assuming it was a lark, Sacret Young went along for the ride, which evolved into a multiyear quest, with each shuttling back and forth from Patmos (where Sacret Young now has a house as well). Lueders knew only that she wanted something “old and cheap,” and not near the sea: “We have enough of that in Greece.” They asked friends and acquaintances for leads, visiting dozens of rundown properties — farmhouses, villas — across the country. Eventually they found a convent on a road that links Pitigliano to the nearby town of Sorano. Protected by a high wall, it looks out onto an archaic landscape of ravines and pathways carved into stone by the Etruscans who settled this area more than 2,500 years ago. A dirt road winds its way across fields of wildflowers to an iron gate and into the convent’s cloister…