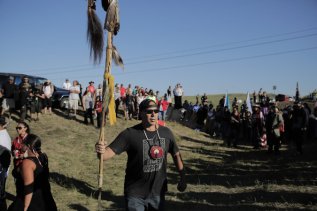 We are concerned about false equivalence journalism, especially on environmental topics, so we have read this story twice before highlighting it. The human interest attraction is meant to be heightened by including the law enforcement perspective. 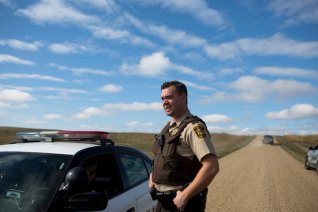 One of the most respected journalists of our time, however, seems to have committed the error right on the heels of an obviously awkward parallel story that serves as a perfect cautionary tale for false equivalence. We still recommend reading it, so you can decide for yourself:

The View From Two Sides of the Standing Rock Front Lines

CANNON BALL, N.D. — The prairie is seething. Work crews are plugging ahead on the 1,170-mile Dakota Access oil pipeline, inching closer and closer to a river crossing that activists view as a critical juncture in their months long fight against a $3.7 billion project that they say will threaten water supplies and that Native Americans say violates their right to sacred land.

Last week, clashes erupted between lines of law enforcement officers and protesters. The air was filled with pepper spray and black smoke from burning tires. The authorities arrested 142 people during what local sheriffs denounced as a riot and protesters said was a peaceful demonstration.

For months now, Mekasi Horinek and Deputy Jon Moll have lived these demonstrations, day in and day out. But they fall on opposite sides of the front lines, reflecting a community that is as divided as, well, oil and water.

Mr. Horinek sees the pipeline protest from the rolling prairies, his arms locked with fellow Native American activists to sing and pray. He sees tribe members standing up to years of racist slights and torn-up treaties. He sees prayer circles, pipe ceremonies and a unifying fight for clean water.

He is the son of Ponca Tribe activists from Oklahoma who took him to rallies when he was just a baby. Mr. Horinek, 43, remembers riding on his father’s and uncle’s shoulders as they marched with Cesar Chavez in the California fruit-pickers’ protests.

“I can’t remember a time that I wasn’t being taught to stand up for human rights, native rights,” he says.

He came to North Dakota for a cause. Here is how he describes that cause now:

Law enforcement officials have accused the protesters of rioting and attacking pipeline contractors, and they have arrested more than 400. But Mr. Horinek says the protesters — water protectors, they call themselves — are not the bad guys. He tells a story:

Last week, he and 49 other demonstrators decided to link arms and sit together by the overturned earth where the Dakota Access pipeline is slated to go. They were on what the Standing Rock Sioux Tribe considers sacred ancestral land, but from a legal perspective, it is owned by the pipeline company. So sheriff’s officers arrested them for trespassing.

Mr. Horinek says he and the others, including his 68-year-old mother, were zip-tied and driven to the county seat, Mandan. He says he had bruises from being tied up so tightly, and from being thrown to the ground and pinned during his arrest. His mother and some of the older people were stiff and sore for days, he says.

Officials wrote numbers on their arms — his was 4838, he says — and held them overnight in cages in a parking garage, men and women separated by a plastic tarp. They spent the night singing and praying.

“No matter what they do to us, they’re not going to strip our dignity, our honor,” Mr. Horinek says. “These are things we hold in our DNA, and we’ll never lose.”

The next morning, he bailed himself out of jail with money he had been keeping in his wallet in case he got arrested, and headed back to the camp…