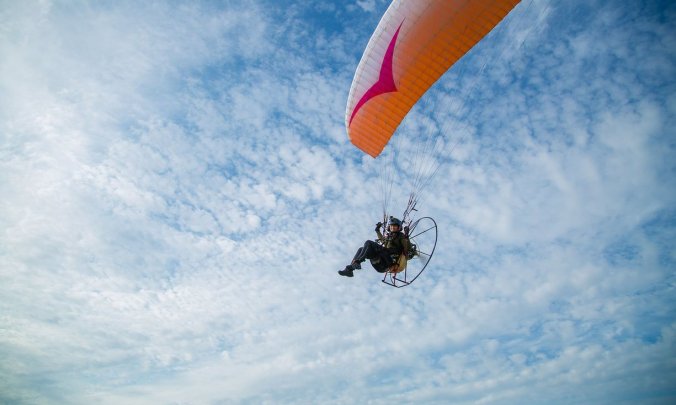 Sacha Dench, the ‘human swan’, in her paramotor as she follows migrating birds from the Russian tundra to the UK. Photograph: WWT/PA

We wish Sacha Dench all the best on this one:

Sacha Dench is first woman to cross the Channel in a motorised paraglider, as part of her journey following migrating birds from Russia to Britain

The conservationist and “human swan” Sacha Dench has become the first woman to cross the English Channel in a motorised paraglider during her epic 4,500-mile journey following migrating birds from the Russian tundra to Britain.

The 41-year-old made history crossing the Channel on her paramotor after an eventful 10-week flight accompanying the annual migration of Bewick swans to better understand the reasons for their declining numbers.

Travelling at just 35mph – struggling to keep up with the birds – Dench flew in a v-formation with geese over Russia, debated shooting swans with hunters in Poland, and also dislocated her knee, which forced her support team to fit wheels to her fragile craft for takeoff and landing.

“The whole way I’ve been trying to put myself in the head of a swan. There are times when I wish I was a swan. It would’ve been so much easier,” said Dench, who works for the Wildfowl & Wetlands Trust (WWT).

“When the temperatures got really cold I’ve wished I could flap my arms and generate some heat but that makes the whole paramotor shake. There have been plenty of scary moments but I don’t feel like it is a dangerous machine anymore.”

With her swan’s-eye view of the world, Dench said she particularly appreciated crossing the Taiga forest of Russia and seeing no trace of human habitation, and witnessing the scale of the tundra. “The colours of the tundra are the most beautiful I’ve ever seen in a landscape. They look like they could be from Mars,” she said.

When she reached villages and towns, she met Russian schoolchildren who were sent out to shoot migrating birds for food at a young age. They were “riveted by how conservation and research works. They had no idea where the swans went”…