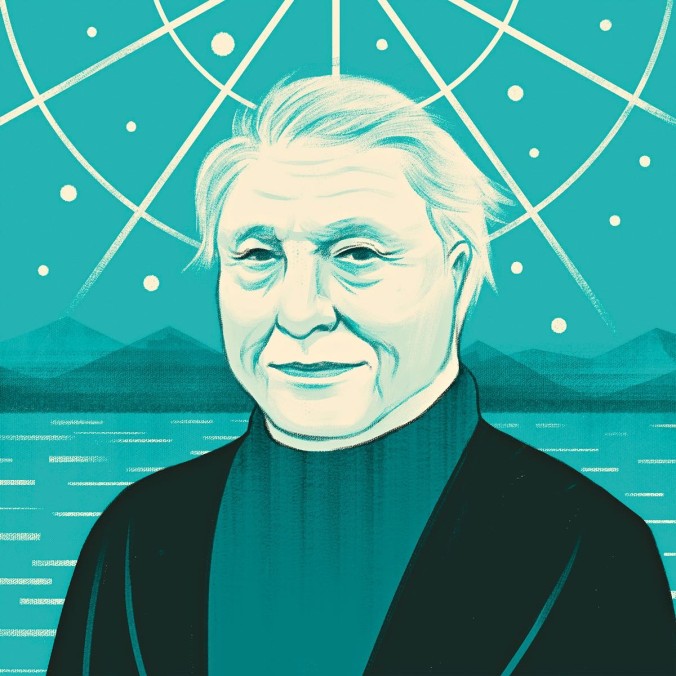 Another from the last issue of the year and part of a series that the New Yorker offers to help us reflect on the big picture (each in this series is a very short read with disproportionate impact):

His game-changing shows remind us that ours is an impermanent and fragile world.

No trip to the American Museum of Natural History in New York is complete without a visit to the Milstein Hall of Ocean Life. It’s a blue-tinged room, booming with surf-roar and the cries of gulls and rimmed with marine dioramas: teeming kelp forests and coral reefs, a walrus lost in thought, dolphins and tuna fleeting through twilit seas.The hall’s vaulting showcases a life-size blue whale, midway through an eternal dive. Whenever I crane to look up at the expanse of its light-dappled underbelly, I think of how Sir David Attenborough described this leviathan in his television series “The Blue Planet”: “Its tongue weighs as much as an elephant. Its heart is the size of a car. And some of its blood vessels are so wide that you could swim down them.” Of all Attenborough’s eyeopeners—and there have been many since the BBC’s groundbreaking 1979 series “Life on Earth” set both the bar and the template for nature documentaries—this one continues to shake me. Not just because the statistics are eminently quotable, equally impressive to distracted adults and too-cool children, but because they put humans right in their place: small enough to swim in a blue whale’s veins, and yet, by 1970, responsible for that species’ near-extinction.

For more than fifty years, Attenborough, who is now ninety, has originated, written, produced, and narrated many of the most game-changing nature shows of our time, from “The Trials of Life” to “The Private Life of Plants” and “Planet Earth.” Thanks to his teams of filmmakers and scientists, who have overcome environmental and technological challenges to bring us nature’s most hidden and far-flung spectacles, we have delighted in the insane plumage of birds of paradise and spied on polar-bear families emerging from their winter dens. Last month, we cheered a young iguana’s Internet-shattering escape from racer snakes, in the British première of “Planet Earth II” (it airs here January 28th). Every encounter, every thrilling chase and absurd mating dance, reveals the heartening tenacity of life.

One of Attenborough’s hallmarks is a refusal to look away from nature’s inherent brutality. I’m not as outraged by this as some viewers are. I like to be reminded occasionally of what Joseph Campbell called the sorrow of realizing that life feeds on other life, that ours is an impermanent and fragile world, susceptible to unforeseeable and life-ending phenomena: an orca attack on a newborn seal; a fallen bough in the path of a caribou fleeing a grizzly; an asteroid hurtling toward the Yucatán; the ascension of a bipedal, storytelling mammal, armed with a ship-mounted harpoon and a Biblical mandate to dominate and subdue.

Perhaps sensing our unwillingness to confront terrifying inevitabilities, however, Attenborough largely refrained from highlighting humanity’s ecological impact until “State of the Planet,” in 2000. Then, in the 2003 finale of “The Life of Mammals,” during a spry cavort across the ruins of the ancient Mayan capital, Tikal, he suggested that the city, which rivalled Rome in scale and was the seat of one of Mesoamerica’s most flourishing kingdoms, might have been decimated by its own inhabitants’ overestimation of natural resources. The episode was one of his first ventures into what has since become an urgent objective: forcing us to accept that our unlikely success as a species has made us a potentially life-ending phenomenon—not just to other animals but to ourselves…