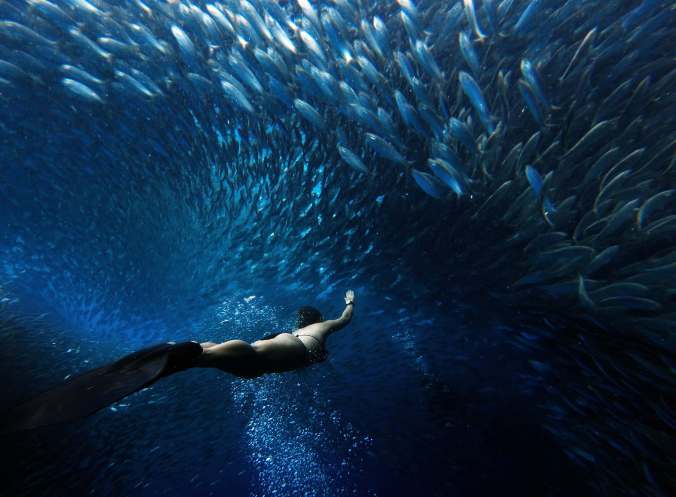 Joanna Klein’s story in the Science section of the New York Times this week, titled Swimming With the Mysterious Sardine Disco Balls of the Philippines, has had me thinking in recent days about the Gulf of California, and specifically about Villa del Faro. If you have reason to be in the Philippines, click the image above to get a quick view of what may be in store for a diver in certain waters.

But otherwise, I will riff off that photo in the direction of Baja California Sur. The intensity of those sardine schools are comparable to the biodiversity in the waters of Cabo Pulmo.

Villa del Faro, located just south of the Cabo Pulmo National Park, offers easy access for those who want to dive there. The 20,000 year old reef was in danger a generation ago and after the park was created, for the last two decades it has served as an example of what recovery can look like in a marine ecosystem with proper protection–17,570 acres to be exact.

On a recent stay at Villa del Faro, most of the guests I met were staying there in order to have access to Cabo Pulmo while staying in the best accommodation in the East Cape area, and doing so off grid. The East Cape has limited lodging, which is paradoxically perfect considering that more development would put the marine ecosystem at risk. And I am partial to the property for other reasons, but the most important reason why you might want to take a look is best described here:

An Ocean Miracle in the Gulf of California-Can We Have More of This, Please?

Posted by Enric Sala of National Geographic on August 12, 2011

For generations we have been taking fish out of the ocean at a rate faster than they can reproduce. The problem is that there are fewer and fewer fish to meet an ever-increasing demand. The solution is simply to take less so that we can continue eating fish for a longer time.

Opponents of conservation, however, argue that regulating fishing will destroy jobs and hurt the economy–but they are wrong, and there are real-world examples that prove this. A scientific study published today by the Public Library of Science shows that protecting an area brings the fish back, and creates jobs and increases economic revenue for the local communities. I have seen it with my own eyes and, believe me, it is like a miracle, only that it is not–it’s just common business sense.

Cabo Pulmo National Park in Baja California, Mexico, was protected in 1995 to safeguard the largest coral community in the Gulf of California. When I dove there for the first time in 1999, I thought the corals were very nice, but there were not so many fishes, and I didn’t think the place was extraordinary. Together with Octavio Aburto and other Mexican colleagues we dove at many sites in the gulf, in a region spanning over 1,000 km. Cabo Pulmo was just like most other places I’d seen in the Gulf of California.

But the Cabo Pulmo villagers wanted more. They decided that the waters in front of their settlement were going to be a no-take marine reserve – fishing was banned with the hopes of bringing the fish back. They had a vision, and they succeeded in a way that exceeded all expectations, including mine.

In 2009 we went back to Cabo Pulmo to monitor the fish populations. We jumped in the water, expecting fishes to be more abundant after 10 years of protection. But we could not believe what we saw–thousands upon thousands of large fishes such as snappers, groupers, trevally, and manta rays. They were so abundant that we could not see each other if we were fifteen meters apart. We saw more sharks in one dive at Cabo Pulmo than in 10 years of diving throughout the Gulf of California!