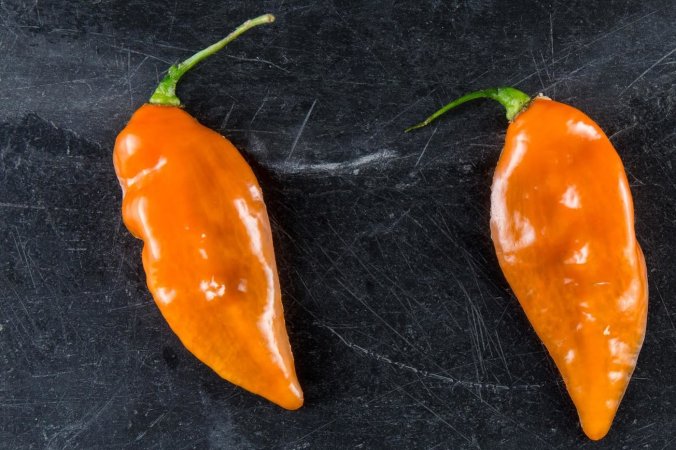 New York City’s Blue Hill restaurant is the biggest buyer of “Habanadas,” a habanero bred to be heatless, so the focus is on its melon-like flavor. Courtesy of Blue Hill

A few reasons to read this include Dan Barber and his Blue Hill being mentioned in the opening sentence; plus the arrival of our new chef at Chan Chich Lodge, hinted at last month; plus the fact that many of our guests cannot tolerate the heat of habaneros; plus our plan to expand the variety of salsas produced at Gallon Jug Farm; plus the fact that the plant breeder responsible for this innovation is in one of our favorite places for agricultural innovation:

For Dan Barber, the celebrated chef of the New York City restaurant Blue Hill, each course of a meal is an opportunity to tell a story. One of these stories is about a pepper — an aromatic, orange habanero without any heat.

Diners are served their heatless habaneros lightly flavored with salt and pepper. They take a bite, then wait for the feeling of a burning mouth or watering eyes that never comes. “When [our diners] question things they know to be absolute — habanero equals intense heat — it gets them to think about eating in a different way,” says Barber. “It’s very important to jujitsu expectations. You end up being more conscious of what you’re eating.”

Blue Hill is the biggest buyer of these peppers, also known as “Habanadas,” which are sold through distributor Baldor Foods. The story Barber hopes to tell with these chiles is that all foods — from apples to yams — were created through a series of conscious decisions. Some plants thrive because of their disease-resistance, growing conditions, or high yields; for others, it’s taste that has caused their popularity. Behind each of the foods we take for granted as finished products are tens or hundreds of generations of genetic tinkering and selection.

“We selected the habanero for heat because that’s what was coveted. But what if you wanted to experience the melon-like experience of a pepper?” Barber asks. “You can’t do it with a habanero — you can with a Habanada.”

Cornell plant breeder Michael Mazourek created the Habanada as part of his doctoral research. He got the idea after discovering a rogue heatless pepper whose genetics behaved very differently from a naturally sweet pepper like the Bell. Courtesy of Baldor Foods

The man behind the Habanada is a Cornell University plant breeder named Michael Mazourek, who created it as part of his doctoral research. He got the idea after discovering a rogue heatless pepper whose genetics behaved very differently from a naturally sweet pepper like the Bell. This pepper had somehow lost whatever made it spicy in the first place. So, Mazourek wondered, what would happen if they created a habanero without the heat?

Their parent pepper, the original heatless variety, “tasted pretty bad,” Mazourek recalled, “so we cross-pollinated it with a habanero, and after a couple more generations we started to get some non-hot but aromatic peppers.” Mazourek had a finished variety of the Habanada as early as 2007, but it was only a few years ago that the pepper started making its way out into the world…