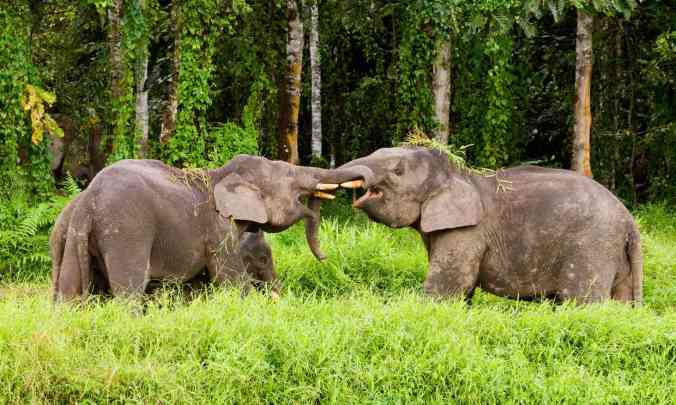 David Attenborough and Steve Backshall have joined conservationists and charities asking officials in Borneo to reconsider a bridge that threatens one of the last sanctuaries of the rare pygmy elephant.

There are now just 1,500 of the world’s smallest pachyderm, according to WWF, and about 300 of them make their home in the 26,000-hectare Kinabatangan Wildlife Sanctuary, in the state of Sabah in Malaysian Borneo. But construction teams have begun preparatory work for a bridge that will cross the Kinabatangan river which weaves through the region. The area is also home to critically endangered orangutans, proboscis monkeys, clouded leopards, gibbons, sun bears, pangolins and thousands of other jungle species, and hosts a thriving eco-tourism industry where travellers can view wildlife from boats on the river or while hiking into the forests.

Attenborough, known globally for his wildlife documentaries and conservation work, rarely intervenes in domestic planning issues. But he has written to the chief minister of the region, Musa Aman, arguing that the plan will harm already embattled wildlife populations and create a new barrier for migrating Bornean elephants. Listed as endangered by the IUCN, they require large areas of habitat for foraging and many fear that the increasingly fragmented populations will lead to genetic problems.

“I have had many encounters with the magnificent and unique species with which your state is blessed,” Attenborough wrote. “If this construction is allowed to go ahead, I am left in no doubt that the bridge will have significant negative effects on the region’s wildlife, the Kinabatangan’s thriving tourism industry and on the image of Sabah as a whole.”

Sabah and the Kinabatangan rainforest have been transformed over the past few decades. Palm oil plantations have fractured much of the habitat, forcing species into ever-smaller pockets of forest. Already, the Bornean rhino (a subspecies of the Sumatra) has vanished from Sabah entirely. Conservationists fear the Bornean pygmy elephant could be next…

One thought on “Borneo Bridge Not Needed, Thank You”