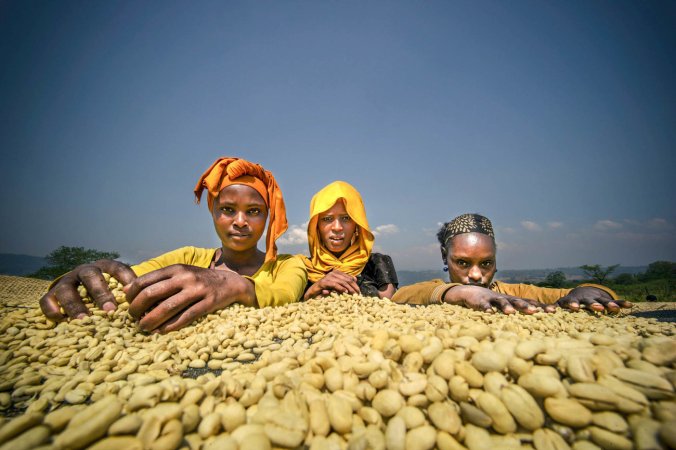 Growing coffee provides income for about 15 percent of Ethiopia’s population and is the country’s top export. Climate change is likely to shrink the land suitable for coffee, thereby also hurting the livelihoods of many people.
Courtesy of Emily Garthwaite

Change is almost never easy. Then there is climate change. Daunting, but we cannot stop considering the implications and the options. The planet may recover in geological time, the underlying logic of those who promote denial of the urgency, but plenty of people are at risk in real time, so no option but to keep focus.

Ethiopia gave the world Coffea arabica, the species that produces most of the coffee we drink these days. Today, the country is the largest African producer of Arabica coffee. The crop is the backbone of the country’s economy – some 15 million Ethiopians depend on it for a living.

But the effects of climate change – higher temperatures and less rainfall – could take a toll on the country’s ability to farm this treasured crop. Climate data shows that rainfall in Ethiopia has declined by almost 40 inches since the 1950s. And the frequency of droughts has increased in recent years, affecting coffee growing regions as well.

Ethiopia could lose from 39 to 59 percent of its current coffee-growing areas to climate change by the end of the century, according to a new study published in Nature Plants.

Ethiopian coffee farmers are “on the front lines of climate change,” says Aaron Davis, a scientist at the Royal Botanic Gardens, Kew, in London, and one of the study’s authors. He says many coffee farmers have told him that they are experiencing less frequent harvests.

A 2012 report by the Famine Early Warning Systems Network and other U.S. agencies found that continued warming in Ethiopia could reduce the country’s coffee-growing area, but it didn’t offer details on the extent of that potential impact.

The authors of the new study used satellite imagery and climate models to get more detailed projections on what parts of Ethiopia would be suitable for growing coffee in the coming decades. The team then tested their model’s accuracy by doing some “rigorous ground-truthing,” says Davis. Over several years, he and his colleagues traveled to Ethiopia to verify their satellite imagery and model projections against actual conditions on the ground…