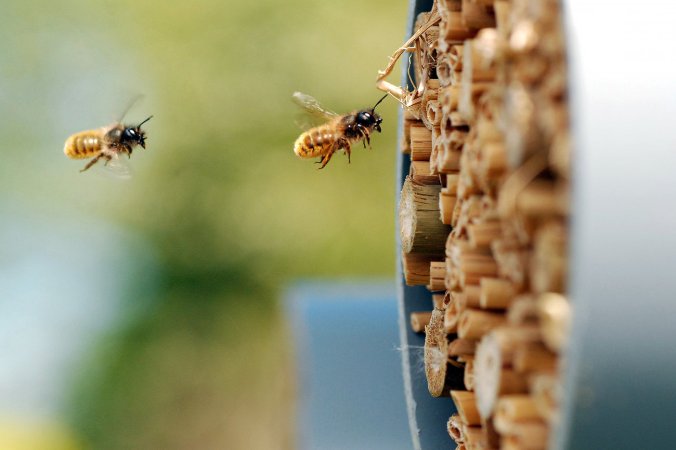 Researchers monitored the health of these wild bees, from the species Osmia bicornis. They nest inside small cavities, such as hollow reeds. Courtesy of Centre for Ecology & Hydrology

Thanks to National Public Radio’s special forces, aka the salt, for their ongoing search for interesting news and stories related to the intersection of nature and food:

In the global debate over neonicotinoid pesticides, the company that makes most of them has relied on one primary argument to defend its product: The evidence that these chemicals, commonly called “neonics,” are harmful to bees has been gathered in artificial conditions, force-feeding bees in the laboratory, rather than in the real world of farm fields. That company, Bayer, states on its website that “no adverse effects to bee colonies were ever observed in field studies at field-realistic exposure conditions.”

Bayer will have a harder time making that argument after today. (Although it still has another argument in its quiver. We’ll get to that later.)

This week, the prestigious journal Science reveals results from the biggest field study ever conducted of bees and neonics, which are usually coated on seeds, like corn and soybean seeds, before planting. Scientists monitored bees — honeybees and two types of wild bees — at 33 sites across Europe, in the United Kingdom, Germany and Hungary. At each site, the bees were placed near large fields of canola. Some of the fields contained canola grown from seeds that were treated with neonicotinoid pesticides, along with a standard fungicide. Other fields were planted with canola treated only with fungicides.

At most sites — specifically in Hungary and the United Kingdom — bees feeding on neonic-treated canola fields generally fared worse than bees that got to live around untreated canola. At those sites, wild bees and honeybees had more difficulty reproducing, and fewer honeybee colonies survived the winter.

The scientist who led the experiment, Richard Pywell, from the Centre for Ecology & Hydrology in the U.K., called the results “cause for concern.”

But the experiment also revealed a complicated picture, because results were very different in Germany. There, honeybee colonies seemed to prosper, whether or not they were living near canola fields treated with neonicotinoids. In fact, honeybee colonies near neonic-treated fields produced more eggs, and more larvae. (Fewer colonies survived the winter, but the difference wasn’t statistically significant.)

Pywell doesn’t seem bothered by this discrepancy. “We think this is a really interesting result,” he says. “We believe that this goes some way toward explaining the inconsistency of previous [research results].”

Apparently, the local environment plays a big role in whether bees are harmed by neonics. “We believe that other factors interact with neonicotinoid exposure to cause negative effects on honeybees and wild bees,” Pywell says.

Pywell doesn’t know exactly what those “other factors” might be — his experiment wasn’t set up to examine them. But it did yield some clues…

One thought on “Bayer, Bees Beware”