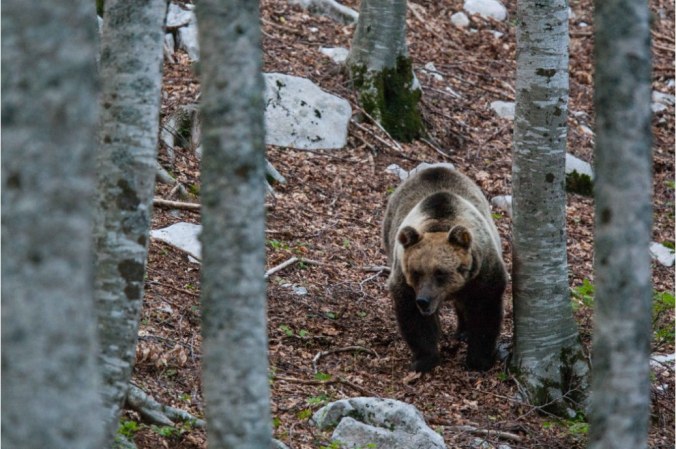 Salviamo L’Orso is committed to conserving the critically endangered Marsican brown bear (pictured here in its central Apennines habitat), and has already won many grants for its grassroots projects. Bruno D’Amicis / Rewilding Europe

It has been some time since we regularly featured news on the topic of rewilding. This announcement is as good a reason as any to revisit rewilding:

A Salviamo l’Orso project titled “Let’s take action for the Bear” was approved for funding by members of EOCA in early November, together with four other proposals from around the world.

With only 50 to 60 individuals remaining, all living in a relatively small area of the Central Apennines, the endemic Marsican brown bear (Ursus arctos marsicanus) is today critically endangered. The Salviamo l’Orso project, which comprises four conservation activities, will enhance the habitat of these magnificent animals and hopefully help them to expand their home range.

The EOCA grant, amounting € 30,000,  will enable Salviamo l’Orso to carry out the following actions:

In line with EOCA philosophy, local communities and outdoor enthusiasts will be involved in the implementation of all these activities. This will hopefully lead to future generations assuming responsibility for their continuation. Salviamo l’Orso has been committed to the conservation of Marsican bears and their habitat since 2012, and has already received numerous grants for its grassroots projects.

Learn more about experiences offered by the European Safari Company in the Central Apennines here.