The broadclub cuttlefish is one of the psychedelic creatures featured in “Blue Planet II.” Photograph courtesy BBC 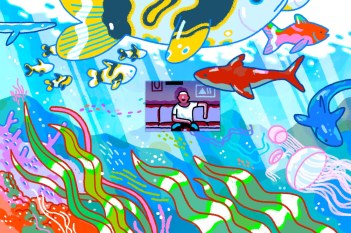 We have not linked to many television reviews, and the reason is simply that we instead mostly promote going and seeing instead of sitting and watching.

But this one seems a perfect exception to the norm because the series narrator is such a frequent guest in these pages, for good reason after many good reasons. This show may be his own sense of a masterpiece, if you consider what he says in a recent interview to a confirmed urbanist, which is worth half an hour of listening to in addition to the review below:

The seven-episode follow-up to the 2001 series flexes the BBC’s mastery of a genre that it created.

The nature documentary “Blue Planet II” is oceanic in topic, tone, scope, and majesty. A production of the BBC Natural History Unit, the seven-episode series flexes its broadcaster’s mastery of a genre that it created. Over excellent footage shot on a circumglobal photo safari, the venerable narrator David Attenborough orates zoological narratives as if delivering a state-of-nature address. “Blue Planet II” follows the network’s “The Blue Planet,” which dropped in 2001, but it is less a sequel than a subsequent quest, like the second voyage of the H.M.S. Beagle, or Apollo 14.

In October, the new program débuted in the U.K., and the introductory episode, titled “One Ocean,” drew a larger audience than any other broadcast in 2017. Fourteen million people, or about twenty per cent of the population, tuned in, with the pride of a seafaring nation, to explore treasures recovered by a venerable media empire.

In January, when “One Ocean” came to these shores—via BBC America, with a simulcast extending to its corporate-sibling cable channels—about three million Americans watched. That’s pretty good, considering the local lack of a sense of event and the relative unpopularity of popular science. Twenty per cent of the U.S. population will never watch the same nature documentary at the same time unless PBS hacks a network feed to replace a Super Bowl postgame show. The three million U.S. viewers were encouraged to social-mediate their viewing experience by typing #GatherTogether, a hashtag too earnest to mock.

“Blue Planet II” sincerely spins itself as not just family friendly, not simply educational, but even uplifting. Attenborough promises introductions to “creatures beyond our imagination.” Behold, for instance, the broadclub cuttlefish. When the cuttlefish needs to subdue a crab to eat, its pigment flickers hypnotically, to stupefy its prey. Creatures beyond imagining, such as these, enrich the imagination when encountered. The moments are psychedelic and spiritual, and “Blue Planet II” collects them into a saga pulsing with sea serpents, multi-armed beasts, protean freaks, photogenic anemones, legends of kelp forests, and cnidarians named for Gorgons. You can feast your eyes on a sperm whale, the great leviathan itself, as cow sharks gnash at its carcass. “Food,” Attenborough says. “Thirty tons of it.”

“One Ocean” begins with an image of the sun’s reflection streaked across water cut by the purposeful prow of a ship; BBC nature shows have a way of ritually orienting the viewer to bow to the sun. The boat shoots through waves graced by dolphins. We see Attenborough from above, on the deck, hale in his blue linen shirt. “The ocean, seemingly limitless, invokes in us a sense of awe and wonder and also sometimes fear,” he begins. The narrative line of the episode flows with the Gulf Stream. Segments begin in the tropical waters and travel to seasonal seas, and venture up toward the poles. In the form of the show, classical values prevail throughout, so that it seems worth the time to scan the metre when Attenborough says something like, “As they travel across the sea, storm-driven winds create huge swells.”

I counted ten vignettes in the first hour of the series, and a roughly equivalent number of Land Rover ad plugs, followed by a brisk behind-the-scenes coda and a tease of a coming installment…