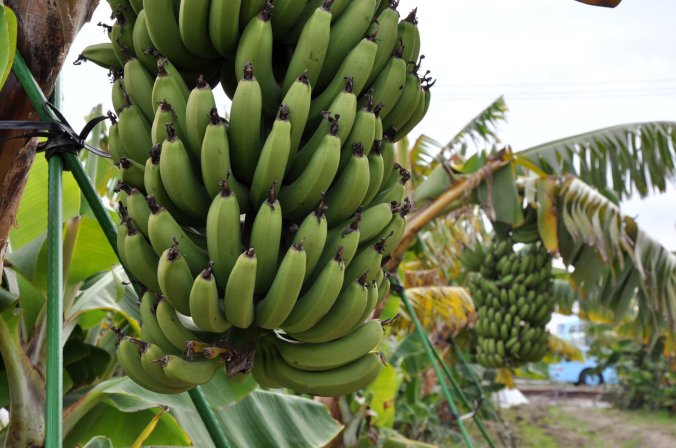 Japanese Mongee bananas debuted this winter, bred to be cold-resistant and pesticide-free. Plus: you can eat the peel. Courtesy of D&T Farm Inc

When we talk about the future of bananas, it is often looking backwards protectively. But forward is an option as this story below illustrates, as with other edibles, likewise:

A Banana Grown At Subzero Temps Also Has An Edible Peel 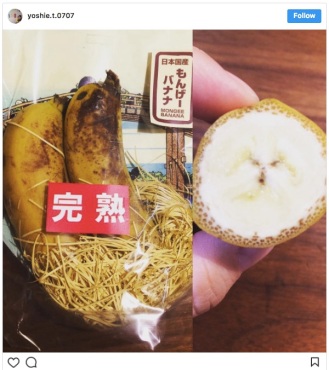 A Japanese farm introduced a new crop this winter: an organic banana with a peel that’s thin enough to eat. In a nod to this appealing outer covering, Setsuzo Tanaka, the banana’s inventor, has named his creation the Mongee (“mon-gay”) banana — which means “incredible banana” in Japanese.

“Setsuzo’s original purpose was to make a delicious banana with no pesticides,” Tetsuya Tanaka, a spokesperson for D&T Farms, the company behind the banana, writes in an email. Setsuzo Tanaka spent four decades tinkering with tropical fruit before the Mongee was born.

But if pesticides were his main concern, why not just grow a normal organic banana? Aren’t all bananas equally tasty?

Today, most bananas do taste the same. That’s because most grocery shelves are stocked with a breed called Cavendish, and they’re said to be blander and mushier than a previously popular breed, the Gros Michel. That’s “Fat Michael” in French. Gros Michel reigned as the king of all bananas in the 1950s — with a taste some have likened to artificial banana flavor — but poor Michel was almost completely wiped out by a fungus called Panama disease in the 1960s. Panama disease didn’t affect Cavendish bananas, so commercial farmers replanted.

Setsuzo Tanaka wanted to bring back the richer, sweeter Gros Michel, and he wanted to grow it pesticide-free. In some ways, that was the trickiest part of his project. While Gros Michel bananas are still around on some farms, they’re just as susceptible to fungus as ever.

Disease threatens the Cavendish banana, too. A similar fungal strain to Panama disease, called Tropical Race 4, has decimated banana crops in the recent years. So conventional banana cultivation relies on a mix of fungicides, herbicides and nematocides, says Carla Ng, an environmental engineer at the University of Pittsburgh who has studied pesticide runoff from banana farms…